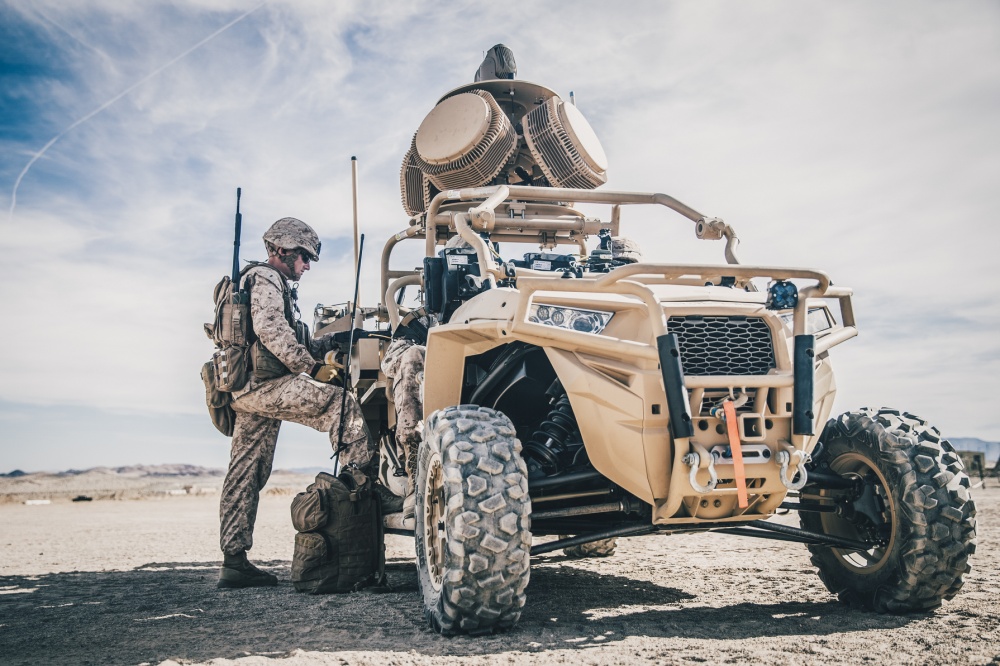 JUNE 19, 2019 – A drone-killing, directed energy weapon prototype is now in the hands of Marines. The Compact Laser Weapons System—or CLaWS—is the first ground-based laser approved by the Department of Defense for use by warfighters on the ground.

“This was all in response to a need for counter unmanned aerial systems to take down drones,” said Don Kelley, program manager for Ground Based Air Defense at Program Executive Officer Land Systems. “We developed a CLaWS prototype for Marines to use and evaluate.”

In recent years, the Defense department has assessed directed energy weapons—more commonly known as “lasers”—as an affordable alternative to traditional firepower to keep enemy drones from tracking and targeting Marines on the ground.

CLaWS is not intended to be a standalone system for Marines to use to counter enemy drones. Rather, if the prototype continues to do well in the current research and development phase, it will serve as a component to an overall system used to counter drones.

“We’re providing CLaWS to Marines as a rapid prototype for evaluation,” Kelley said. “Depending on the results, CLaWS could become part of a larger capability set.”

Rapid prototyping, rapid delivery
The GBAD program, managed within the portfolio of PEO Land Systems procured the CLaWS prototype through the Defense Ordnance Technology Consortium—or DOTC—which was commissioned by the then-Under Secretary of Defense for Acquisition, Technology and Logistics to foster collaboration between government, industry and academia regarding ordnance technology development and prototyping.

“The typical acquisition timeline can be lengthy,” said Lt. Col. Ho Lee, product manager for GBAD Future Weapons Systems at PEO Land Systems. “But this project, from start to finish—from when we awarded the DOTC contract, to getting all the integration complete, all the testing complete, getting the Marines trained, and getting the systems ready to deploy—took about one year.”

From a production standpoint, Lee said that the program office and its partners integrated various commercial items to create CLaWS.

“We’ve been doing rapid prototyping, rapid delivery,” said Lee. “With this and a lot of the other efforts we are doing, we are using items currently available and integrating them to meet a capability. Little development, if any, went into this.”

Leveraging expertise for increased lethality
Obtaining the green-light to deliver and deploy CLaWS requires a bit more finesse, which is why PM GBAD leveraged DoD interagency partnerships to fulfill the need.

The operational use of new laser weapons, such as CLaWS, requires approval from the Office of the Secretary of Defense, as it involves various factors such as legal reviews, concepts of employment, rules of engagement, tactics, potential collateral damage and human effects, proposed public affairs guidance and other relevant information.

“This program lives and dies with the leveraging of expertise and resources with others,” said Kelley. “It’s about getting these capabilities quickly into the hands of Marines and being good stewards of taxpayer dollars.”

Move fast and lase things
As Marines evaluate the CLaWS systems over the next few months, the GBAD program office already has their next target in mind: upgrading it. Depending on the results, the program office says it could incorporate the CLaWS into other fixed-site and mobile C-UAS defeat capabilities.

“What’s interesting about CLaWS for the Marine Corps is, usually for things like this, we’re on the back end,” said Lee. “With this one, we’re actually in front. Everybody is watching closely to see what’s going to happen.”