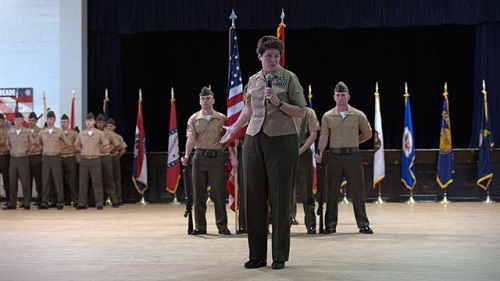 The mission of MCCYWG is to man, train and equip Marine Cyberspace mission teams to perform both defensive and offensive cyber operations in support of United States Cyber Command and Marine Forces Cyberspace Command.

“We’ve always had the means to communicate and the means to protect that communication, but today we’re in an environment where those methods are more and more reliant on a system of transmissions, routers and networks,” said Col. Ossen J. D’Haiti, the commanding officer of MCCYWG. “So, the ability to protect that, the ability to control that and deny an adversary to interdict that, is crucial to command and control.”

MCCYWG will bring the Marine Corps into the realm of cyberspace.

Cyberspace is defined as the notional environment in which communication over computer networks occurs.

In current years, everything from email, to information storage and banking is online and a target for hackers. MCCYWG is the Marine Corps’ firewall to prevent this from happening.

“Cyber operations as a whole are anything from ensuring your network is secure to home use like when you buy a router, set it up, set up passwords and encryptions,” said Sgt. Brian Mueller, a digital network exploitation analyst with MCCYWG.

Now more than ever, the Marine Corps is seeing the need for defense of its networks and communications.

“[Cyberspace operations] ensure that our systems are secure to stop hackers from getting into our systems where our personal identifiable information and everything else is stored,” said Mueller. “ While the offensive side is what can we do to hinder an enemy.”

While MCCYWG is now active, only a few Marine cyberspace mission teams are up and running, but the unit is expected to be fully operational in fiscal year 2017.

“We’re still evolving, but I think five years from now, as the Marine Corps comes online and understands more and more what is happening in this space, the Cyberspace Warfare Group will look much different than it does today,” said D’Haiti.