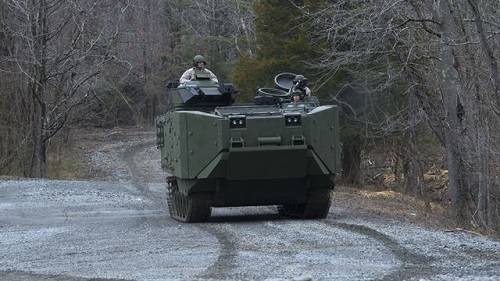 The Corps realizes the importance of maintaining these battle-tested vehicles until being replaced by the amphibious combat vehicle. PEO LS has been tasked with adapting the vehicles to make them survive until the Amphibious Combat Vehicle replaces them.

“We’re going to modernize about a third of the fleet,” said Col. Roger Turner, director of the Marine Corps Capabilities Development. “We think we can extend the service life of this vehicle, make it perform better, and have enough survivability to be relevant in the current and future operating environments ahead.”
PEO LS created the AAV Survivability Program to provide the Marine operating forces with 392 vehicles that have a longer life span because of updated features for the current battle spaces and force protection.

“We’ve noticed in both Iraq and Afghanistan the AAV had some vulnerabilities in an IED environment, so we decided to upgrade it to increase its armor protection and also to increase its water performance,” said Turner.

The AAV SU, or Amphibious Assault Vehicle Survivability Upgrade, will build upon the existing hull. The upgrades include buoyant armor, blast-mitigating seats and spall liners. They will also include fuel tank protection and automotive and suspension upgrades to keep both land and sea mobility regardless of the added weight.

“It does the exact same thing with some upgraded horsepower and basically more armor, so it allows the Marines to go into environment where before we couldn’t go,” said Capt. James McGowen, an infantry officer assigned to Project Manager Advanced Amphibious Assault.

These 392 vehicles can equip the Corps with four battalions for amphibious operations and additional support.

“We think that this system is going to make this vehicle operationally relevant in the current and the future operating environment for years to come,” said Turner.

AAVs allow the Corps to maximize its amphibious capabilities and the survivability program will help bridge the gap to the future of amphibious vehicles.