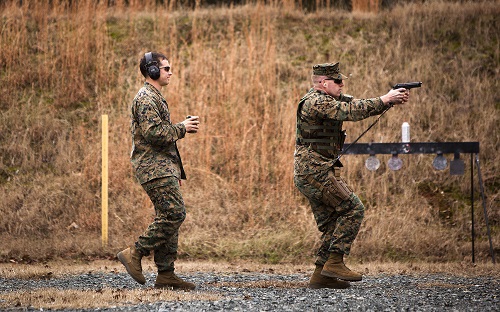 FEBRUARY 22, 2016, CAMP HANSEN, Japan – The Okinawa sun hangs high in the sky and glints off of brass from deployed rounds are scattered across the firing line as service members engage targets at high speed during a three-gun shooting competition Feb. 17-19 at Camp Hansen, Okinawa, Japan.

Instructing these prestigious shooters are Marines from the U.S. Marine Corps’ own Combat Shooting Team, who traveled from Quantico, Virginia, to share their knowledge and shooting techniques with the competing service members.

“We teach the Marines how to be more effective in combat with their standard issued weapons systems,” said Sgt. Martin Lucero, and instructor and competitor for the U.S. Marine Corps Combat Shooting Team. “We travel, we learn new tactics and we give that knowledge back to the Marines through traveling to different Marine Corps hosted competitions to instruct.”

The team’s duty is to gather information on how to improve themselves as combative shooters, practice their tactics and share their knowledge to service members.

“We travel to civilian competitions around the U.S. to observe tactics, procedures and weapons that are used, and we mold it and adapt it to combat,” said Lucero, a Denver, Colorado, native. “Our goal as instructors is to do what we can to teach the Marines to stay combat effective instead of just shooting stationary targets.”

When the team is not instructing, they are practicing their shooting, firing approximately 16,700 rounds per week individually or competing in military and non-military matches.

“There is a major competition once per month, we compete in local matches in Virginia where we are stationed and we shoot with the Quantico shooting club,” said Staff Sgt. James M. Fehr, a competitor, instructor and staff non-commissioned officer in charge for the team.

Competitive combat shooting is beneficial to the service members by putting them under pressure and making them apply the tactics taught to them, according to Lucero.

To be offered a spot on the team, Marines have to prove that they are qualified shooters by winning a medal in a Marine Corps hosted shooting competition, according to Fehr, a San Manuel, Arizona, native. Winners will be invited to join the team as a ‘summer shooter,’ which is a five-month billet. If they perform well after the five months as a summer shooter, they can be selected to join the team for a three-year billet.

Following this match, the team will travel to Hawaii to instruct service members before a similar shooting competition.

“Our goal is to make the Marines into better warfighters,” said Fehr. “Everyone benefits from going out and training in their weapon systems.”