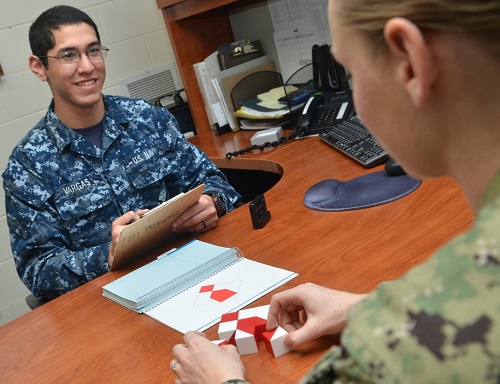 TBI is caused by a bump, blow, or jolt to the head, or a penetrating head injury which disrupts the normal function of the brain. However, not all blows or jolts to the head result in TBI.

According to the Centers for Disease Control and Prevention (CDC), TBI contributes to about 30 percent of all injury deaths in the U.S. each year.

“Know the signs and symptoms of TBI and seek proper care,” said Dr. Kirsten Pollick, Naval Hospital Jacksonville’s neuropsychologist, TBI program director and mental health department head. “The severity of a TBI can range from mild, with a brief change in mental status or consciousness; to severe, with an extended period of unconsciousness or amnesia.”

At least 2.5 million children and adults sustain TBIs each year. Of those, about 2.2 million are treated in emergency departments and about 280,000 are hospitalized for TBI-related injuries.

Physical signs and symptoms of TBI include loss of consciousness, state of being dazed, headache, fuzzy or blurry vision, nausea or vomiting, dizziness, sensitivity to light, balance problems, or feeling tired or having no energy.

Some symptoms appear right away, while others might not be noticed for days or months after injury. Children with a brain injury can have the same symptoms as adults, but it’s often harder for them to let others know how they feel.

Leading causes of TBI include falls, being hit by an object, and motor vehicle crashes. Active-duty personnel and Reservists are at an increased risk for sustaining a TBI while deployed to areas with increased risk of blast exposures, such as improvised explosive devices. However, of all new cases of TBI among military personnel, about 80 percent occur in non-deployed settings such as motor vehicle crashes, falls, sports and recreation activities, and assaults.

Individuals with suspected brain injuries should seek medical care immediately by contacting their Medical Home Port team to schedule an urgent care appointment, or for emergencies going to the emergency room or calling 911.

NH Jacksonville patients can be evaluated by the hospital’s TBI screening program after receiving a consultation or referral from their Medical Home Port team, Deployment Health Center, Neurology, or Behavioral Health.

To learn more about brain injury awareness visit the CDC website at http://www.cdc.gov.

NH Jacksonville’s priority since its founding in 1941 is to heal the nation’s heroes and their families. The command is comprised of the Navy’s third largest hospital and five branch health clinics across Florida and Georgia. Of its patient population — 163,000 active and retired Sailors, Soldiers, Marines, Airmen, guardsmen, and their families — about 85,000 are enrolled with a primary care manager and Medical Home Port team at one of its facilities.