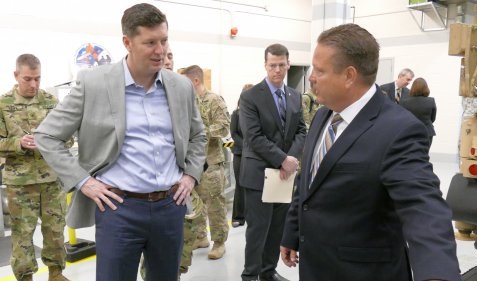 REDSTONE ARSENAL, Ala. (May 17, 2016) – In a world where technology changes rapidly, unavailable parts for weapons systems can be detrimental to the Warfighter and their mission. Finding proactive solutions for obsolete parts and products is imperative for the U.S. Army Aviation and Missile Research, Development and Engineering Center.

According to the DOD Guidebook for Diminishing Manufacturing Sources and Material Shortage obsolescence is the loss, or impending loss, of a manufacturer of items or suppliers of items or raw materials.

Since 1987, the Obsolescence Management team, located within the Engineering Directorate of AMRDEC, has supported aviation and missile programs combating the ever present threat of obsolescence. The obsolescence management program has evolved with acquisition and sustainment concepts and includes electronics, software, firmware, hardware, and many commercial-off-the-shelf items.

“Obsolescence is very risky to a program,” said Anthony Haynes, obsolescence management team chief. “Everything from microelectronics to raw material can become obsolete overnight. Once something becomes obsolete, you are opening the doors for security and supply issues. It’s hard to believe, but 70 percent of electronics are obsolete prior to system fielding, and one component may become obsolete five to ten times during the weapon systems life cycle.”

The obsolescence group consists of 40 engineers and researchers who support various missile and aviation platforms by developing obsolescence engineering strategies and constantly monitoring parts and products for availability issues.

“We keep track of over 230,000 military parts which we know specifically when they are going to go obsolete,” Haynes said. “This gives us time to be proactive and find solutions or alternative sources for those upcoming obsolete parts.”

AMRDEC’s Multifunctional Obsolescence Resolution Environment is a government owned engineering analytical tool developed and maintained by the obsolescence team, which contains more than 10 years of past Army product availability research. This centralized data clearinghouse is a work flow enabler that provides a framework for obsolescence management of numerous AMRDEC supported systems.

The most costly form of obsolescence has traditionally been in situations where a redesign is required to design obsolescence out of a system. AMRDEC has combated this costly effort by establishing an organic System Development Group for the redesign of obsolete systems. This group provides a lower cost redesign alterative over traditional approaches utilized by the material developer.

“If our only option is to redesign a part, AMRDEC has the system, processes, and manufacturing capabilities to redesign it at a much lower cost,” said Benjamin Harding, AMRDEC’s Software Engineering Directorate, System Development Group lead.

AMRDEC has successfully redesigned the Motor Controller Unit and the Improved Data Modem. The MCU controls the PATRIOT Launcher’s positioning motors. The legacy MCU was difficult to build and relied on several obsolete parts that were becoming increasingly difficult to procure.

AMRDEC’s Systems Development Group redesigned the MCU with components that consume less energy, are more robust, cost less than half the original’s design, and reduced production time from 24 months to four months.

The IDM is a communication device fielded on Army rotary wing aircraft. It enables digital messages to be sent and received from a helicopter and provides network access to exchange allied and enemy location. Obsolete parts and old software forced the IDM to be redesigned.

He emphasized government ownership provides Better Buying Power. “The government is getting smarter. AMRDEC is able to retain ownership of the IDM technical data including specifications, software, test documentation and work instruction.”

AMRDEC has addressed thousands of obsolescent issues with a cost avoidance of more than $300 million to date. Collaboration across services and agencies continues to build best practices, minimize redundancy and provide an avenue to leverage data and solutions.