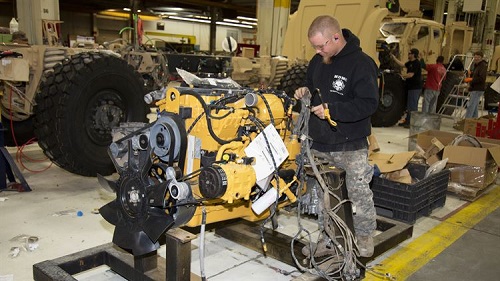 JUNE 23, 2017, Marine Corps Logistics Base Barstow, Calif. – The first two Light Armored Vehicle Anti-Tank Modernization A2 models outfitted with a state of the art rocket launcher have rolled off the line at Production Plant Barstow.

He and technicians with Raytheon, the manufacturer of the LAV-ATM, are training artisans from the Marine Depot Maintenance Command’s production plants in Barstow and Albany, Ga., in how to install the MTAS weapons system, aboard the Yermo Annex of Marine Corps Logistics Base Barstow, Calif.

The improvement of the LAV-ATM rocket launcher is substantial. “The Marines are excited about getting the new capabilities of the MTAS turret,” Zuhlke said.
“One of the advantages of the MTAS is that it is always in the up position. They can scan on the move, they can track on the move, and when they stop they’re instantly ready to fire.

“The previous weapons system Emerson 901 (aka Hammerhead) turret would have to be stowed when the LAV was on the move. When they stopped they would have to raise the turret and then they could scan and engage the target,” Zuhlke continued.

He explained that the Emerson 901 turret has been on the LAV-AT line since the vehicle was first introduced to the Marine Corps in 1983. The Corps saw a need for a more up to date launcher to replace the nearly 30-year-old Emerson, so the MTAS system began development in 2012 with a target of 2017 for getting them out to the Marines in the field.

“These are the first two vehicles to come off the line at Production Plant Barstow with the MTAS turret,” Zuhlke said. “Production Plant Albany will also start inducting these vehicles and incorporating the turrets.”

The Tube-launched Optically-tracked Wire-guided missile, or TOW, fired by the LAV-ATM has a nearly two-mile range and can penetrate almost three feet of armor, according to information available on the Raytheon website.

“The old Emerson turret had too many mechanical parts that could fail,” said Mack Brown, one of the LAV-ATM mechanics from Production Plant Albany training at PPB. “The new MTAS is mostly electronic in nature and more reliable.”

“Getting the best equipment to the warfighter is what matters the most to me,” added Patrick Jackett, a colleague of Brown’s training alongside him at PPB.
Zuhlke said the final testing of the MTAS turret is nearly complete and the upgraded system will be issued to Marine units for deployment very soon.