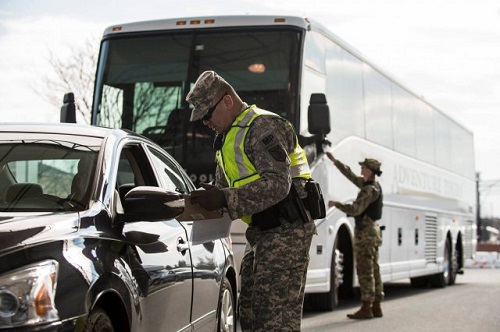 ARLINGTON, Va. (April 4, 2016) – Beginning April 16, legislation bars some state IDs from some states and territories in the United States will no longer be accepted as primary identification for persons to gain access onto Joint Base Myer-Henderson Hall and other federal installations.

As detailed in the Real ID Act of 2005, driver’s licenses and identification cards from Illinois, Missouri, Minnesota, Washington and the territory of American Samoa currently do not meet federal regulations and cannot be used as primary forms of ID for base access.

There are a couple of exceptions to the rule, according to Tracie Miller, physical security specialist at JBM-HH’s Directorate of Emergency Services.

Although Minnesota and Washington are not currently Real ID Act compliant, they participate in a program called the Enhanced Driver’s License (EDL), which produces IDs that surpass Real ID Act standards and therefore can be used to access the joint base as well as other federal properties, she said.

But not every ID card issued in Minnesota and Washington is an Enhanced Driver’s License, so visitors from those states will have to check to see if their license denotes whether it is an EDL.

“If a person’s driver’s license denotes that it is in fact an EDL, it will be accepted,” Miller said.

But if a person’s ID card isn’t an EDL, or if they have a license from Illinois, Missouri or American Samoa, they’ll need to use a different form of primary identification to access the joint base.

“If you’re coming on for a special event — a funeral, to attend church service — for any reason where you do not have an authorized form of DOD identification or an [Automated Installation Entry] pass, there are documents that you can utilize,” Miller told the Pentagram.

She specified that if people from any of those states have a Common Access Card or another form of an authorized DOD ID, they will be granted access.

“If you have a CAC card, then that’s fine,” she said. “If you have an authorized DOD-issued ID card, then you are absolutely, 100-percent fine for entrance onto the installation.”

Miller noted that the list of states or United States territories that are or are not accepted under the Real ID Act will change.

“We may see states added or removed as they come into or out of compliance,” she said. “We would certainly update the public as soon as possible to let them know which documents are no longer accepted or are now currently accepted.”

And drivers should still carry their licenses, even if they are not Real ID compliant.

“They should still carry them on their person, of course,” Miller said. “These are still documents that you need to drive.”

“We will still ask to see them as a secondary form of identification to complete a background check requirement for base access,” said Miller.

To check your state’s compliance level, visit dhs.gov. For more information and frequently asked questions about Real ID compliance, visit www.dhs.gov/real-id-public-faqs. The DHS website offers users the chance to sign up for by-state email updates that alert users to changes in their state’s compliance status with the Real ID Act of 2005.

JBM-HH DES has been phasing in new access regulations since January 2015. According to JBM-HH Regulation 190-16: Installation Access Control, which is available on the joint base website, those without acceptable forms of DoD identification who desire escorted or unescorted access to Army installations will enter the installation through an authorized access control point, and they must be vetted utilizing the National Crime Information Center and the Terrorist Screening Database.

The Installation Access Control Pass application forms for contractors and visitors will be available online soon, Miller said. Officials are also working to upload a fillable version of these forms. Currently, these forms are included in the regulation on the website, but they are not fillable online and must be printed, filled in by hand and brought to the Visitor Control Center in Bldg. 415 on the Fort Myer portion of the joint base. Likewise, the completed forms can be submitted to security personnel at Hatfield Gate’s inspection lane upon joint base entry.

The versions of the forms included in the regulation are a new, updated version, Miller said.

Previous editions of the contractor and visitor access application forms are currently being accepted but will soon be phased out.

Miller noted that DES will soon announce a date when new versions of the forms will become the only forms accepted.

Officials are also working on a way that will allow personnel to send an encrypted version of the completed forms to JBM-HH law enforcement officials. By encrypting the forms, which can only be done through a .mil email account, officials can ensure protection of person’s personally identifiable information, such as social security numbers or birthdays, during electronic transmission of the forms across the Internet.