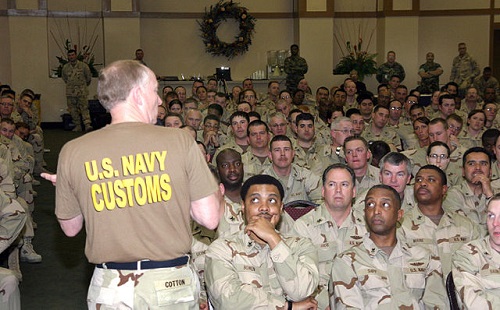 A primary goal of the symposium was to provide an open forum where Reservists had the opportunity to communicate with the active component leadership and demonstrate the important role LCS Reservists currently play in the program, as well as how they can best augment the community moving forward. The symposium also provided an opportunity for Reserve unit commanders to receive guidance and plan new strategies to ensure their units are trained to be able to step aboard and immediately contribute to the mission.

Prompted by evolution of the LCS leadership structure and the development of ship divisions following last year’s review of the program, the Reserve community is examining the benefits of restructuring, as well. Leaders discussed the practicality and benefits of shifting their units’ constructs to align with how the active-duty squadrons are restructuring.

“The goal of the LCS Reserve force is to support the active-duty component in the most efficient and practical way possible,” said Cmdr. Eric Rasch, of the Littoral Combat Ship Squadron (LCSRON) 1 operational support office. “We have a thousand Sailors creating a tremendous talent pool with untapped capability; their motivation is sky high and we want to ensure, as leadership, we are doing everything we can to maximize their success and the successes of the LCS community. The symposium this weekend was just another stepping stone for meeting our ultimate goal.”

Currently, the LCS Reserve force is the largest component of the Naval Surface Reserve Force — composed of 20 units consisting of up to 50 Sailors per unit, spread across the country from as far north as Everett, Washington, and as far east as New York City. The units mimic the active component crew construct; 12 units are considered “seaframe” units and contain Sailors of all ratings, similar to the active-duty core crews; six units are mission module units — three surface warfare and three mine warfare — composed of Sailors with specific skill sets tailored to the mission module capabilities; the last two units are considered (LCSRON) units and are designed to help augment the active-duty staff at LCSRON 1 in San Diego and LCSRON 2 in Mayport, Florida.

The combined 1,000 Reserve Sailors provide nearly 20,000 operational days annually, and each Sailor drills for two weeks per year. Integrating with the active component crews and staffs, the Reserve Sailors work on various LCS hulls and at the squadron. While the support provided to their active-duty counterparts is constantly developing, the work distribution goal for the drill weeks is approximately 50 percent anti-terrorism and force protection (watchstanding support) and 50 percent ship maintenance support. Sailors have said they are eager and excited to support the ship in any way possible.

“For our Reserve Sailors, who are only aboard a ship for two weeks, maintenance checks and watchstanding give them a way to contribute — something they’re eager to do on board,” said Lt. Cmdr. Ed Giron, of the LCSRON 1 operational support office. “There are countless times when Sailors come back from duty, excited about completing maintenance actions in the engineering plant, and they truly enjoy the work they are doing for LCS, for the Navy, and for our nation.”

In the most recent LCS Sailor-led planned maintenance availability aboard USS Independence (LCS 2), Reserve Sailors completed more than 200 checks on damage control equipment, increasing the total weekly rate of maintenance completion by 20 percent. While the Reservists have been working well with their active-duty counterparts thus far, the ideas discussed at the symposium will surely lead to even more effective integration in the future.