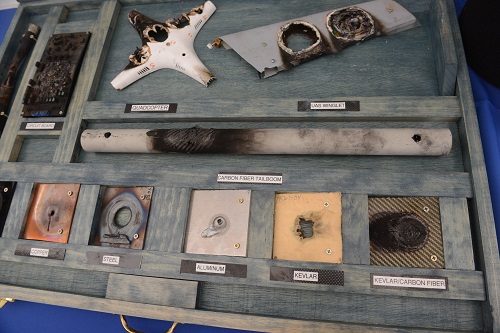 JUNE 26, 2017, WASHINGTON – The Army and Navy are increasingly incorporating laser weapons on a limited number of platforms and training exercises, according to Matthew Ketner, branch chief of the High Energy Laser Controls and Integration Directorate at the Naval Surface Warfare Center Dahlgren Division, Virginia.

Ketner spoke on these emerging laser technologies spoke last month during Lab Day at the Pentagon.

For its part, the Navy placed a 30-kilowatt laser onboard the USS Ponce, an amphibious transport dock ship, in 2014. The laser has been tested extensively and is authorized for defensive use.

The Army, meanwhile, is testing lasers to bring down unmanned aerial vehicles, according to Ketner.

In one training instance, a 10-kilowatt laser was placed on a Heavy Expanded Mobility Tactical Truck and tested during a Maneuver Fires Integrated Experiment at Fort Sill, Oklahoma, in April 2016. The laser successfully shot down a number of unmanned aerial vehicles, also known as UAVs.

In February and March of this year, the U.S. Army Space and Missile Command shot down a number of UAVs with a 5-kilowatt laser mounted on a Stryker during the Hard Kill Challenge at White Sands Missile Range, New Mexico.

The purpose of the Hard Kill Challenge “was to assess and look at technology… to do a ‘hard-kill’ shoot down of Group 1 [UAVs] and inform decision-makers on the current state of technology and how it can deal with single and multiple targets,” said Adam Aberle, SMDC High Energy Laser Division technology development and demonstration lead.

On the plus side, lasers are silent and invisible to the human eye and are thus hard to detect by the enemy, Ketner said.

Also, a laser has a near-perfectly straight trajectory, unlike the arc of an artillery round, which allows the laser to be much more accurate in finding its target.

Katner also pointed out that a laser beam can also be scaled to the object in question, as he showcased a display of items that were hit by a laser. The objects included steel plating, aluminum, copper, carbon fiber and Kevlar. Other display items included a fried circuit board, a destroyed fixed-wing UAV and quadcopter, all victims of the laser beam.

The power of the beam can be adjusted for any material, he said. There’s even a non-lethal adjustment for human targets.

So far, lasers have taken out cruise missiles, mortars, and other projectiles during testing, Katner said.

One downside, he noted, is that lasers take a lot of energy and have difficulty penetrating haze, dust, smoke, and materials with anti-laser coatings. But overall, lasers remain a valuable tool in the military’s arsenal. “Unlike a traditional gun,” Katner said, “lasers don’t run out of bullets.”