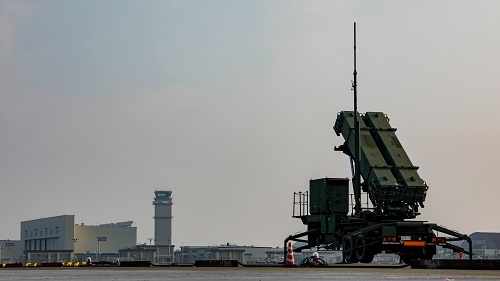 PAC-3 is a surface-to-air missile defense system, which provides a highly reactive hit-to-kill capability in both range and altitude while operating in all environments.

This training displays the strength of the U.S.-Japan alliance and demonstrates the JASDF’s ability to rapidly deploy multiple defense assets to U.S. military installations across Japan.

“We conduct many exercises with our partners in the Japan Self-Defense Forces,” said U.S. Marine Corps Lt. Col. Robert Vuolo, the MCAS Iwakuni operations officer. “MCAS Iwakuni being a hub in the region and a strategic location for the Marine Corps makes this a natural choice of locations, and we want to prove that we can work together. . . It improves our interoperability due to the speed that we can bring them onto the installation, set them up in a position they can operate from and be ready to utilize their systems.”

PAC-3 protects ground forces and critical assets at all echelons from advanced aircraft to cruise missiles and tactical-ballistic missiles.
During the training, JASDF service members convoyed onto the air station before deploying the PAC-3, AN/MPQ-65 radar set and Antenna Mast Group.

“Both countries have robust ballistic-missile capabilities and the ability to perform this mission,” said Vuolo. “However, there is a tremendous amount of value for us to move those parts around, deploy and redeploy our forces and their forces to respond to any contingency. It adds flexibility to the U.S. – Japan alliance and the ability for us to work together in meeting our joint mission of providing security to both of our countries and the region.”

Vuolo said for him, the most valuable part of the training was meeting Japanese counterparts and building working relationships with them, which could be taken forward into future training evolutions.

JASDF 1st Lt. Yui Okubo, armored vehicle operations officer with the 2nd Air Defense Missile Group, said conducting this training in an unfamiliar location helped strengthen their abilities to proficiently maneuver and deploy the PAC-3’s, and she would like to potentially conduct more exercises like this.

“We don’t have many opportunities to train on U.S. bases, and it was meaningful,” said Okubo. “Rather than training at our own station, we can improve maneuver proficiency if we train at a different location. Most of our members trained here for the first time, and we would appreciate if we have this type of opportunity again in the future. I think this training was a great accomplishment.”