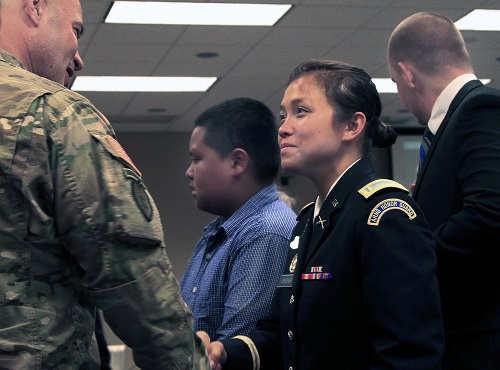 “I always wanted to be infantry,” Jorgensen said, adding that as a child, she thought infantry was the only job a Soldier could have. “I kind of made it a personal goal that as soon as I could, I’d go [infantry].”

In December, Defense Secretary Ash Carter announced all gender-based restrictions in every branch of the military would be lifted. The first of these restrictions was lifted in January, just as Jorgensen began gearing up for OCS.

Before entering the accelerated, eight-week OCS program, she and other candidates spent time preparing at the 185th Regiment (Regional Training Institute) at Camp Dodge.

Sgt. 1st Class Traci Uitdeflesch, a platoon trainer at the RTI, served as a mentor for the officer candidates prior to their departure to OCS.

Jorgensen said she received nothing but positive feedback and support from both her peers and the RTI staff.

For Army Col. Steve Kremer, commandant of the RTI, Jorgensen is a good fit as an infantry officer.

“She was top of the board, she was phenomenal,” Kremer said. “Her personality and her drive to do well made me confident she [has] the basic qualities you would want in a leader that’s going to be in a combat arms [leadership position].”

Others in her OCS class agreed.

“When everyone else quits, Jorgensen’s still running,” said Army 2nd Lt. Jeff Garretto said. “I’d go to combat with her in a minute.”

Other cited her level headedness, ability to stay calm in high-pressure situations, humility and work ethic as traits that make her a good leader.

“She’s the last one off the field trying to get something done and the first one up in the morning trying to get started,” said Army 2nd Lt. James Weltha, a classmate from OCS.

Jorgensen will be assigned to the Iowa Army Guard’s Headquarters and Headquarters Company, 1st Battalion, 168th Infantry Regiment as a rifle platoon leader prior to leaving for the Infantry Basic Officer Leader Course at Fort Benning, Ga.
Jorgensen said she’s looking forward to the taking on her new role as a platoon leader.

“Everything’s a mental game in the Army, I’ve learned,” Jorgensen said. “It’s not to say I won’t have any challenges in the future, but I’m prepared for those challenges.”