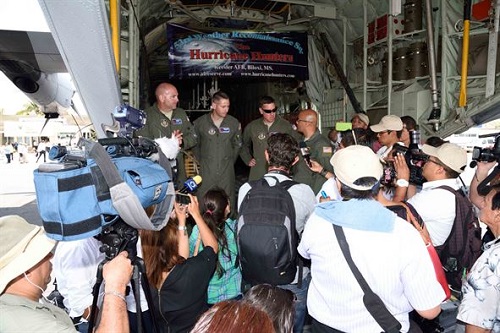 The purpose of CHAT is to raise hurricane awareness across Latin America and the Caribbean, and to maintain and expand partnerships among the NHC, U.S. Northern Command, Air Force and neighbors in the region.

The Hurricane Hunters and NHC officials stopped at four different locations during their tour; to include two in Mexico — Cabo San Lucas and Puerto Vallarta, and two in the Caribbean — the British Virgin Islands and Puerto Rico.

“The key to this tour is encouraging people to prepare in advance, before the next hurricane while the weather is still good, because figuring out your hurricane plan is very difficult when the hurricane is on your doorstep,” said Dr. Rick Knabb, the NHC director.

Col. Frank Amodeo, commander of the 403rd Wing that oversees the 53rd WRS, said, “Beyond just providing data for the National Hurricane Center, the great thing about this mission is that we are ambassadors for the United States visiting our allies, our friends and our neighbors. We’re educating them not just about hurricane preparedness, but also giving them a peek at our military and our commitment to the region.”

For the first leg of the tour, Hurricane Hunters and NHC officials stopped at the international airport in Cabo San Lucas to provide information to local residents and media about their missions and hurricane preparedness. Several officials from various Mexican government organizations toured the aircraft and talked with Hurricane Hunter crew members.

Amodeo spoke to the importance of the U.S. Northern Command’s participation in this event.

“(This mission) also entails partnering with other countries, so in addition to promoting hurricane preparedness, this is also a ready-made theater security cooperation mission,” Amodeo said. “So for NORTHCOM to embrace (the CHAT) and include this in their annual planning is the right thing to do.”

The tour marked the first time the Hurricane Hunters and NHC members visited the British Virgin Islands since the tours began in the 1970s. Hurricane Hunters met with local government officials to discuss ways to coordinate and distribute weather data. They also provided tours of the WC-130J Super Hercules weather aircraft they fly and visited local schools to talk with students about the Hurricane Hunter mission and hurricane preparedness.

“Many years ago you would see people scrambling to the stores to buy supplies just before a hurricane arrives, but you don’t see that as much anymore,” said Angel Crespo, the Puerto Rico Emergency Management director. “The information provided by the Hurricane Hunters and National Hurricane Center helps us provide information to the people so they prepare themselves in advance for the upcoming storm season.”

For 1st Lt. Leesa Froelich, a 53rd WRS aerial reconnaissance weather officer, this was her fourth year as an ARWO but her first year participating in the CHAT. She stressed the significance of these tours to the public.

“These tours are very important for the public since it gives them the opportunity to see and learn about what we do, and to learn about how to prepare for when a storm comes their way,” she said.