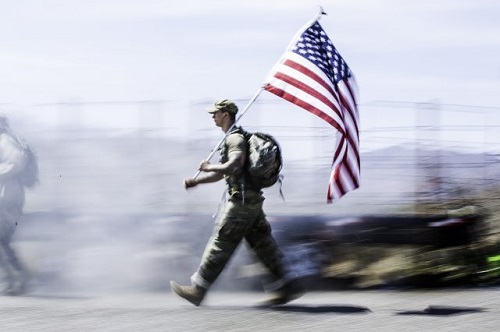 The Bataan Memorial Death March honors a special group of World War II heroes responsible for the defense of the islands of Luzon, Corregidor and the harbor defense forts of the Philippines. On April 9, 1942, tens of thousands of American and Filipino soldiers surrendered to Japanese forces. The Americans were Army, Army Air Corps, Navy and Marines. Among those seized were members of the 200th Coast Artillery, New Mexico National Guard.

“We have marchers here covering nine decades,” said event host WSMR Commander Brig. Gen. Timothy Coffin. “That is the history of our past … and the foundation of our future.”

Coffin called the event “a gathering of eagles” that included participants from all 50 states plus the District of Columbia and several foreign countries. “We have the wise (eagles) … who have seen much and give us much advice, we have young eagles in the prime of their life with much strength and we have the younger eagles to whom we are showing the way.”

Deputy Assistant Secretary of Defense, Office of Warrior Care Policy, James Rodriguez was among the leaders marching with wounded warriors.

“I am honored and privileged to be marching alongside many of our nation’s veterans and service members,” Rodriguez said. “The Bataan Memorial Death March serves as an important reminder of the enduring resilience and perseverance of our nation’s heroes. I see these same distinct qualities in the men and women who proudly wear the uniform today and in our wounded, ill and injured service members who are striving each day to successfully recover.”

Bataan prisoner of war survivor 98-year-old retired Col. Ben Skardon completed 8.5 miles of the Bataan Memorial Death March course for the ninth consecutive year marching with his “brigade,” made up of family members, prior students or individuals who have connected with him in prior marches. His “brigade” has consistently grown every year, this year was his largest following.

As in previous years, Skardon finished his march in good spirits. Fellow Clemson University classmates and prior students of Skardon chanted the Clemson fight song as Skardon approached his finish line.

WSMR Installation Management Command Administration Assistant Shelly Lowe, who runs the volunteer program for the event, said over 1,200 volunteers help make the memorial march the success that it is every year.

“Without them we couldn’t do it,” Lowe said. “We appreciate every one of them. They help make Bataan successful.”

Volunteers from every field came out to support Bataan. These included medic volunteers, emergency services volunteers, and volunteers to man water stations, some as young as seven years old.

“Since the first time I came out here, it’s been so impactful so I keep coming back,” said Ryan Francis, a volunteer with First Light Federal Credit Union.

Many of the marchers carried food items such as rice and beans in their rucksacks to reach the 35-pound minimum, which they donated to the six local county food banks. At the time of publication, more than 12,000 pounds had been donated.