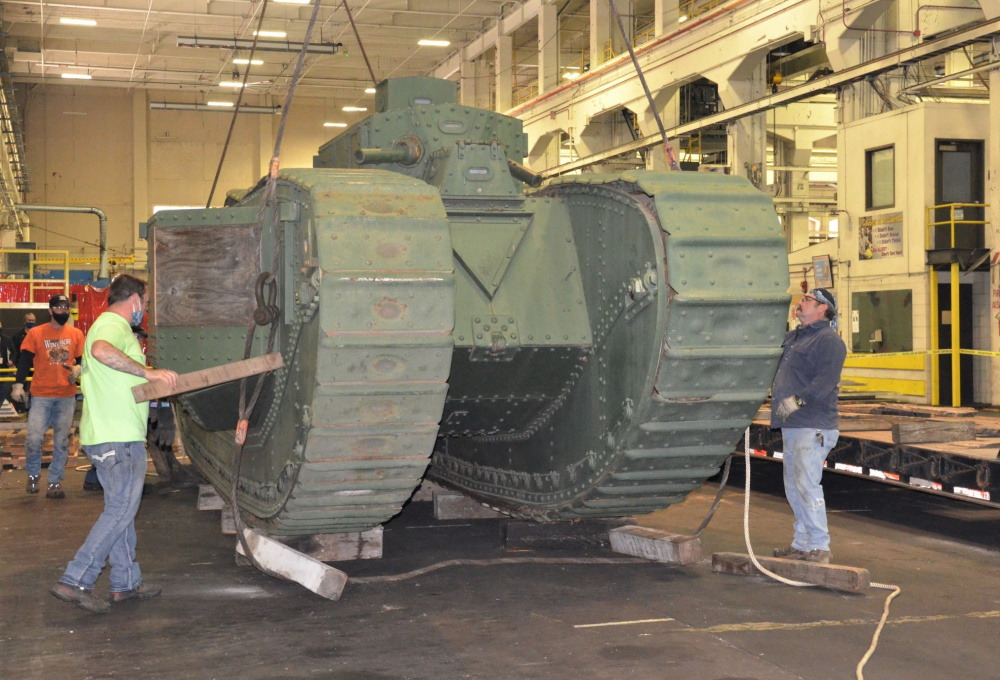 MAY 12, 2021 – The tracks laid by the Liberty Mark VIII tank 101 years ago, when it rolled off the Arsenal production line, have led the way for its return to the Quad Cities. The historic piece of military equipment arrived back home here May 10.

The Mark VIII, also known as the International Tank, was the first heavy tank produced by the U. S. It was a joint venture between the U.S. and Great Britain to design and manufacture a heavy tank for use during World War I.

These tanks were in service from 1920 to 1932. In 1932, they were withdrawn from service and stored until 1940, when 90 were shipped to Canada as training vehicles. Today, only three tanks remain, one in wartime ally Great Britain, and two in the U.S., owned by the Army. The “Yank”-based tank RIA received came from the Armor and Cavalry collection at Fort Benning, Georgia.

Being the site where the tank was produced, it is little wonder the Army chose RIA to be its final place of duty.

“As the Army seeks to move historical collections to relevant Army Museums, it was only natural that the Mark VIII Tank be brought back to where it was built,” said Allie.

It will take a little while for the tank to be camera ready for visitors. Like many military historical treasures from conflicts past, a little spit shine and polish is needed to get it into “regulation” status. That aspect of the homecoming process will be handled by the Rock Island Arsenal – Joint Manufacturing and Technology Center.

“After the tank arrives at the Arsenal, it will undergo restoration work to reinforce its structure and stabilize it, followed by a repainting,” said Allie.

Plans are underway for the tank to be displayed in a covered pavilion just down the street from the building where it was originally manufactured. It will serve as visual reminder of the contributions the Arsenal and its employees have made to our national defense efforts spanning from World War I to the present.

“This is an incredible piece of Rock Island Arsenal and Quad Cities history that we are thrilled is coming home,” said Allie. “The Arsenal’s workforce has always been drawn heavily from the Quad Cities community and to have this piece of history come back to where it was made by member of that community is something special.”