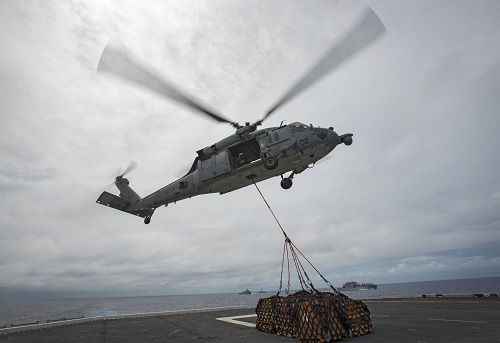 In July, HSC-25 conducted split detachment operations by sending a group of pilots, air crewmen, and maintainers to Mutsu Bay, Japan, to participate in the biannual Joint Mine Countermeasures Exercise (2JA) with several U.S. Navy assets and partners from the Japan Maritime Self-Defense Force (JMSDF). During the exercise, they joined Helicopter Mine Countermeasures Squadron (HM) 14 for mine-hunting operations, as well as helicopter-borne mine neutralization with members of Explosive Ordinance Disposal Mobile Unit (EODMU) 5 and JMSDF EOD.

The detachment later joined Bonhomme Richard when Expeditionary Strike Group 7 set out on their fall 2016 patrol, as the group’s only search and rescue asset. HSC-25 supported the Bonhomme Richard’s flight deck certification, the Air Combat Element’s embarkation, and the 31st Marine Expeditionary Unit Certification Exercise (CERTEX). After the ESG left the Japan area of responsibility, they set sail for Guam, where they played a vital role in Valiant Shield — a biannual blue-water U.S. field training exercise. Following the exercise, Det. 6 supported the ESG and MEU during PHIBLEX 2016, a joint U.S. and Philippine amphibious landing exercise. Throughout the patrol, HSC-25 continued to provide round-the-clock reconnaissance and logistical support. Their tireless efforts included the movement of over 1.5 million lbs. of cargo, transfer of 540 passengers, and the execution of three medical evacuations.

When the detachment left Guam, Martinez gave them three fundamental rules to live by.

“One — be brilliant at the basics; two — do the right things, and three — do things right,” he said.

“The key to our success is rather simple following basic tenants; I put the power in my people to do what they knew they had to,” said Martinez. “They were inspired to be creative and were able to expand not only their own horizons, but our squadron’s capabilities as well. I owe everything to them; we are more than a team or detachment now. We are a family!”

The mission of HSC-25 is to train, deploy, and sustain combat ready helicopter detachments in support of the national defense and security strategy while providing expeditionary and regional area logistics, search and rescue, force protection, and disaster response to the Territory of Guam and the Northern Marianas Islands.