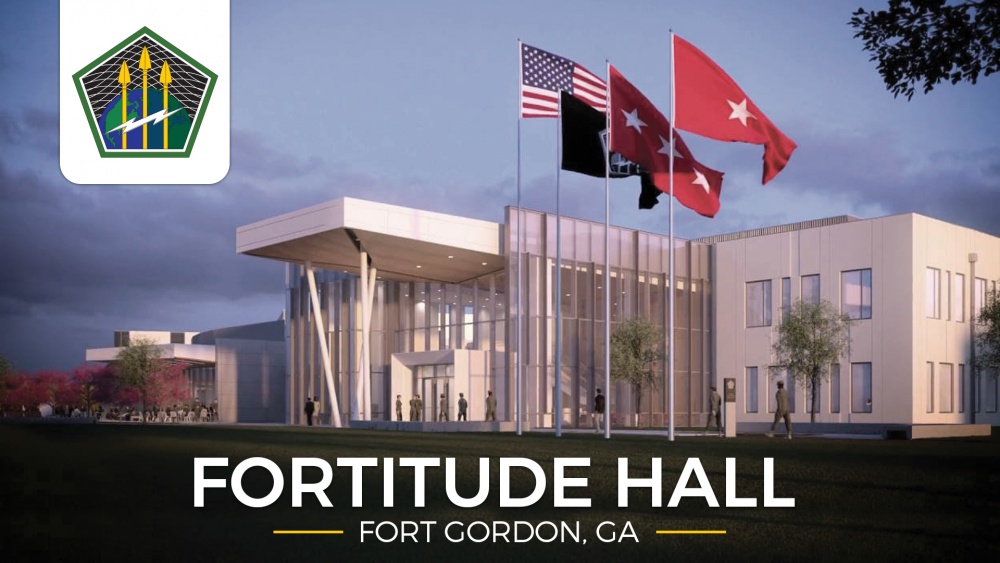 ARCYBER commander Lt. Gen. Stephen G. Fogarty hosted the ceremony with Under Secretary of the Army Hon. James E. McPherson; Gen. Paul Nakasone, commander of U.S. Cyber Command, director of the National Security Agency and chief of the Central Security Service; and ARCYBER deputy to the commanding general Ron Pontius. A small audience of local, regional and national military and political dignitaries attended the event in person or virtually, including all four general officers who have commanded ARCYBER since the command’s founding in 2010.

The ceremony officially designated the facility as Fortitude Hall. The name is drawn from World War II’s OPERATION FORTITUDE, a crucial element of the Allied plans to mislead Hitler about the Allies’ intentions for the invasion of Normandy. Integrating intelligence, counterintelligence and special operations with political, economic, diplomatic and other information elements, the operation’s goal was to influence the Germans to make faulty strategic decisions and tie their forces down away from the planned assault.

The state-of-the-art 336,000-square-foot facility, with a construction and infrastructure fit-out cost of approximately $366 million, is the culmination of plans begun in 2013 when Army officials first directed that ARCYBER consolidate functions at Fort Gordon as part of plans to bring cyberspace operations, capability development, training and education together at one location. The move unites Army Cyber organizations that were spread across multiple facilities at three Army installations in three states, providing a focal point for command and control of round-the-clock global operations conducted by ARCYBER’s staff and subordinate units.

Pontius described the complex’s impressive technology and what it means to ARCYBER to have a facility that brings the command more closely alongside some of its key partners.

“This beautiful facility is just part of the result of more than a decade of planning driven by the ARCYBER and Army leadership’s determination to optimize two things: first, seamless access to critical infrastructure enabling ARCYBER’s core defense, offense, and network operations missions; and second, collaboration between the Army’s operational cyber force and the institutional Army—the trainers and doctrine developers at the Cyber Center of Excellence,” he said.

The under secretary spoke about the Army’s transformation into a multi-domain force ready to take on all challenges across all warfighting domains, and called Fortitude Hall an important step in that effort.

The Army must pursue its modernization objectives to become more lethal and agile, McPherson added. Cyberspace operations are a critical component in modernization and readiness, and the synergy the new complex creates with ARCYBER’s partners in the Intelligence, Signal and Electronic Warfare communities, and the Cyber Center of Excellence’s trainers and doctrine developers, will help to build information dominance and “put our Army out front in cyberspace.”

Like McPherson, Fogarty called the facility a vital weapons system with global reach.

“Welcome to the Army’s premier power projection platform for Cyber, Information Operations and Electronic Warfare,” he said. “This building was purpose-built to facilitate those collaborative partnerships to better enable the integration of Cyber, Signal, Electronic Warfare, Intelligence and Information Operations to help commanders achieve their mission.”

“It represents the center of our global reach … and it allows us to sense, decide and act much faster than our adversaries in a warfighting domain where speed is paramount.”

All the day’s speakers saluted the invaluable partnerships that ARCYBER has built that help the command to endure and succeed, that they said will be further enhanced by having a consolidated presence in the area.

Nakasone highlighted ARCYBER’s strong relationships with NSA-Georgia, the Fort Gordon garrison, the Army Cyber Center of Excellence and Army Cyber School, the city of Augusta and greater Central Savannah River Area, the Georgia Cyber Center, and academic colleagues such as Augusta University, the University of South Carolina and the area Alliance for Cyber Education.

“Due to the partnerships that ARCYBER built and nurtured to date, the Army’s operational and institutional cyber forces enjoy unprecedented synergies, operating from a single, information power projection platform,” he said.

Fogarty called the building’s name an apt representative of the character of the cyber professionals who will serve there.

“The word ‘fortitude’ is defined as mental and emotional strength in facing difficulty, adversity, or danger courageously. The work of the scientists, code-breakers, and others who came before us took real fortitude. And today, our warfighters and Army civilians operating, defending, attacking, and influencing the information environment in defense of the nation routinely demonstrate fortitude.”

“I hope that whoever enters this facility will say, ‘This is a place where something significant happens every day, and fortitude is in our DNA.’”

For a fact sheet with more information about Fortitude Hall, go to https://www.arcyber.army.mil/Info/Fact-Sheets/Fact-Sheet-View-Page/Article/2332071/army-cyber-fact-sheet-fortitude-hall/

ABOUT US: U.S. Army Cyber Command integrates and conducts cyberspace, electronic warfare, and information operations, ensuring decision dominance and freedom of action for friendly forces in and through the cyber domain and the information environment, while denying the same to our adversaries.

Interested in the challenge of joining the Army Cyber team? Check out military and civilian cyber career and employment opportunities by clicking on the “Careers” tab at www.arcyber.army.mil