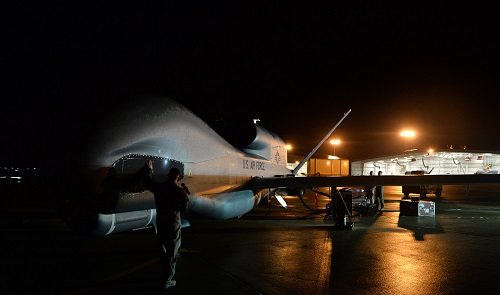 NOVEMBER 14, 2016, BEALE AIR FORCE BASE, Calif. (AFNS) – An aircraft accelerating down the runway with 8,500 pounds of thrust and a wingspan greater than a Boeing 737 is inherently dangerous. The danger is amplified when the pilot isn’t even located on board the aircraft. Trailing behind pursuing the aircraft is “Hawkeye” ensuring the remotely piloted aircraft ascends from the surly bonds of Earth.

The RQ-4 Global Hawk, serves as the Air Force’s high-altitude intelligence, surveillance and reconnaissance, long endurance RPA. Global Hawks are loaded with an integrated sensor suite and cameras capable of providing global all-weather, day or night ISR, however while on the ground visibility for pilots operating the aircraft from within the Mission Control Element is limited. That is where Hawkeye fulfills its role.

“Hawkeye is any RQ-4 pilot who performs preflight inspections no differently than a typical pilot would conduct a preflight inspection,” said 1st Lt. Jeffrey, a 12th Reconnaissance Squadron RQ-4 pilot. “The pilots in control at the MCE have limited visibility; Hawkeye is the eyes and ears of RQ-4 Global Hawks on the ground. While maintaining a safe distance, Hawkeye pursues the aircraft at 40 mph down the runway until takeoff.”

Prior to engine start Hawkeyes reviews a checklist with maintenance personnel verifying the functionality of the aircraft.

“We guide them from a maintenance perspective during their walk arounds,” said Staff Sgt. Josh Reynolds, a 9th Aircraft Maintenance Squadron RQ-4 crew chief. “We provide a second set of eyes and answer any maintenance related questions the pilots may have.”

According to Jeffrey, he has personally witnessed multiple occasions where a Hawkeye prevented a potential incident.

“Hawkeye has prevented various incidents from bird strikes, runway incursions, located leaking hydraulic fluid and damaged aircraft,” he said. “While deployed serving as Hawkeye I once identified an engine fire on another jet.”

Aside from locating potential hazards and serving as the eyes and ears of the aircraft, Hawkeyes are also responsible for communicating critical information to the pilots coordinating with the air traffic controller before takeoffs and landings.

“When the air traffic controller gives clearance to land, Hawkeye is on the taxiway visually locating the jet, ensures the airfield has no debris or obstructions, and serves as a secondary source to the tower notifying the pilot the aircraft is cleared to land,” Jeffrey said.

Global Hawks possess the capability to fly nonstop for 28 hours. Occasionally, the pilots and their aircraft are geographically separated.

Although pilots and their aircraft are sometimes separated, technology and mission elements such as Hawkeyes, enable missions to be accomplished.

“Hawkeye conducts those firsthand checks,” Jeffrey said. “When we fly, the Hawkeye is there for every single takeoff and landing.”