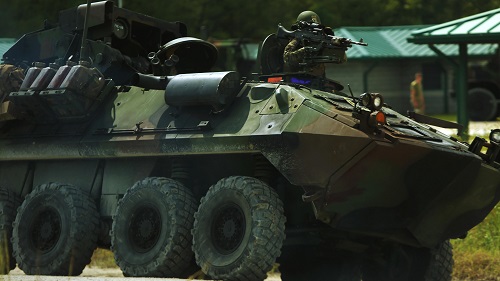 The training included a wide array of weapon systems and tactical vehicles that would normally be seen during an infantry training exercise or prior to a battalion deploying.

“Our mission was to improve our proficiency on a various platform of weapon systems that we have within the battalion to include the M107 .50 caliber special application sniper rifle, M2 .50 caliber heavy machine gun, the M240B medium machine gun and Tube-launched, Optically tracked, Wire-guided (TOW) missiles,” said 1st Lt. Daniel Deland, training officer for 2nd LAR.

“Today we took all their individual skills and brought it together. They got to see the big picture of what their job is in the grand scheme of things,” said Deland. “They finally get to see… they’re a small part of a larger machine.”

Marines were able to use the variety of weapons in ways they’d see in battle instead of in a traditional range style course. Instead of the Marines practicing in a single position, the leadership put safeties in place to allow the Marines to fire their weapons and change positions on the battle space.

“This kind of variety of weapons you generally would not see except under the most extreme circumstances. It’d be unheard of to fire this many different types of weapons in one place in one time if you weren’t at 29 Palms in the middle of an infantry training exercise,” said Staff Sgt. Caleb M. Little, Security Platoon Sergeant, 2nd LAR.

During the training the non-commissioned officers had the chance to make a scheme of maneuver for the unit.

“Small unit leaders were very aggressive in making event driven scheme of maneuvers that made sense. They had the opportunity and the munitions to engage multiple types of vehicles and to think in a tactical mindset. It was good for the new lieutenant, outstanding for the young lance corporal, but really the guys who benefitted the most were the young corporals and senior sergeants,” said Little.

Having a variety of weapons gave the Marines a unique experience to see each piece, how it comes into the battlefield and what type of a response they’ll get from the enemy during combat.

“For a lot of the [corporals and sergeants] this was their first opportunity to lead. For a lot of them you’re not really going to get into something in which you have the ability to change the scheme of maneuver, to set conditions to develop the situations,” said Little. “The sergeants get to decide what the enemy is going to do forcing the young corporals to react, forcing the lance corporals to think on their feet.”

Variety in training gives Marines an opportunity to evaluate their skills, apply old and new knowledge and learn from their previous short comings. Conducting training with these conditions gives the Marines the tools and knowledge to adapt to whatever situation arises to better prepare them for battle.