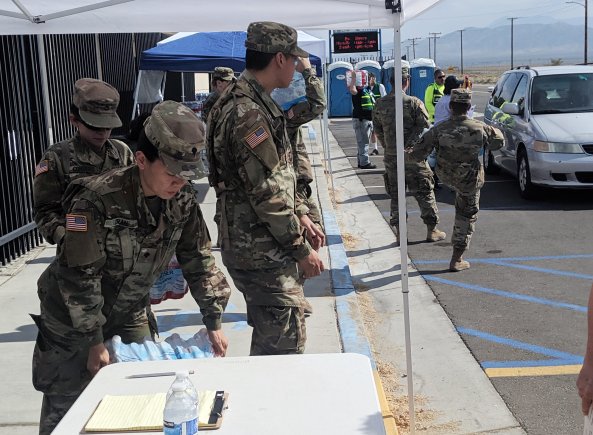 JULY 11, 2019 – Two major earthquakes that hit towns in the Mojave Desert of California July 4 and 5 left behind cracked and burning buildings, a closed highway and burst water lines that prompted call-up of the National Guard to help distribute water and food.

The 143rd Military Police Battalion set up an emergency supply distribution point in Trona High School over the weekend after 30 miles of damaged Route 178 closed, temporarily isolating the town. Broken water lines had shut off water to the residents and the only food store in Trona had been damaged by the quakes and closed.

The 143rd MPs in Lancaster, California, were activated by the governor and deployed to Trona. At the high school, they have been distributing 500 cases of drinking water per day to residents, said Sgt. Robert Madrigal, NCO in charge of the task force.

About 200 Red Cross snack packs have been distributed daily, Madrigal said, along with about 100 Meals Ready to Eat. Another 200 gallons of water have been given out per day for pets and other purposes, he said.

In the 100-degree heat, residents have been lining their vehicles up at the high school to receive the water and food packets. Madrigal said Soldiers handing out the supplies noticed how tired the residents looked.

“We try to comfort them as much as possible,” he said.

Some of the residents told Soldiers about walls that collapsed in their homes, but thankfully no one was killed or seriously injured, said a California Guard spokesman. He attributed the low injury rate to the remoteness of the area.

About 200 National Guard Soldiers were initially activated for the humanitarian assistance and Madrigal said about 50 remain on active duty. The water and food supplies were brought in by emergency management agencies, he explained. 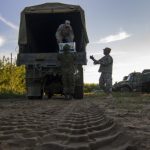