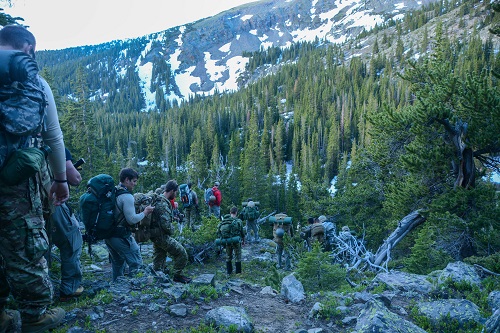 JULY 12, 2017, FORT CARSON, Colo. – At the 10th Special Forces Group (Airborne)’s Special Operations Advanced Mountaineering School, known as SOAMS, Green Berets are trained to survive in mountainous regions, and the skills they learn enable them to carry out difficult and dangerous mountain warfare operations across the globe.

During the mountaineering school’s featured summer course, the Senior Mountaineering Course, students learn these critical skills over a seven week period. At the end of the course, participants demonstrate their mountain warfare skills and must pass a final test during a culminating exercise before they can claim the title of Senior Mountaineers.

A recent SMC iteration’s final test featured students verifying their newly acquired skills by taking on leadership roles to train mountaineering skills and tactics to a group of untrained Soldiers.

An SMC Instructor for SOAMS said the culminating exercise was especially important because it was the first time the course’s students would be leading Soldiers instead of being led by the course cadre.

“After this, students can take partnered forces and move them up, over, and through mountainous terrain to conduct military operations,” he said.

Missions like this are at the core of Special Operation Forces’ role in national defense. Through an indigenous approach, Operational Detachment-Alpha teams enable partner forces by living, training, and fighting alongside their counterparts.

The students’ objective for the culminating exercise was to establish an observation point on the top of a local peak, perform a direct action strike against a high-value target, then safely move to the exfiltration point on the other side of the mountain — all while working with an untrained force.

One SOAMS instructor said that this type of mission is common for Special Operations Forces.

“All throughout the world, SF teams deploy and typically work with a partner force,” he said. “That partner force may or may not know as much as you do when operating in mountainous environments. So as an ODA, you have to maximize their ability by training them, and possibly leading them through mountainous terrain.”

Training, advising and assisting partner forces so that they have the necessary skills and tools to be self-sufficient is at the heart of what Special Operations Forces do on a regular basis.

“The whole point of Special Forces,” one student said, “is to work ourselves out of a job. There’s no point in us just continuing to bring these guys along as much as we feel comfortable.”

A key component of what made the culminating exercise unique was the presence of untrained troops. They simulated what the students could be asked to do as Senior Mountaineers in Iraq, Afghanistan, and beyond — leading a force with little to no mountaineering experience through difficult mountainous terrain during a military operation.

“The fact that we’re working with an untrained troop, there’s a lot more that comes into play,” one student said.

The students developed a day-long training program to familiarize the untrained Soldiers with the types of tasks they might have to complete during the mission, including proper knot tying, safely navigating a fixed line rope for moving up and down difficult terrain, and rappelling down the side of a cliff.

The culminating exercise itself began with a 5 a.m. infiltration at the base of Colorado’s Ten Mile Range, west of Fort Carson. From there, the element moved up the side of the mountain across rocky and unstable terrain until they reached a peak at nearly 13,600 feet.

After observing their target, the Soldiers called in a notional airstrike to destroy it, and then headed back down the opposite side.

During their movement to the exfiltration point, the element received word that a helicopter had crashed in their vicinity and that would need to recover the pilot — another critical capability that Special Operations Forces provide.

By the time they finished for the evening, the students and their untrained force had climbed and traversed the difficult terrain for nearly 20 hours.

“Having these untrained troops in the CULEX has been paramount,” one student said.

The successful completion of the exercise meant that all of the SMC students would graduate and become Senior Mountaineers before heading back to their ODAs. Now, these Soldiers qualified to safely and quickly lead their teams through any mountain mission.

“Now, we expect them to teach and lead,” one instructor said. “They leave the school with not just the mountaineering skills, but also the skills to lead untrained troops on missions that run the full range of unconventional warfare, counter-insurgency, foreign internal defense, and they’re going to be able to explain to the commander the abilities and limitations of that element in a mountain environment.”