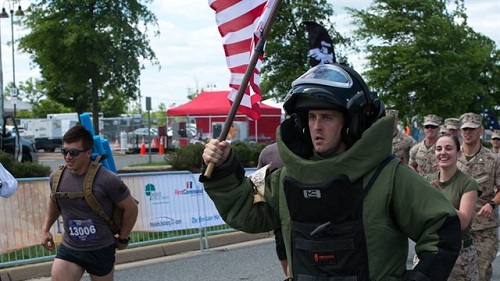 MAY 17, 2016, FREDERICKSBURG, Virginia – Marines, along with services members from each U.S. military branch, and nearly 6,000 participants from 45 states, ran 13.1 miles at the Marine Corps Historic Half Marathon in Fredericksburg, Virginia, May 15, 2016. Some ran for the spirit of competition and some ran for a purpose larger than themselves.

“Just the thought that there is a wounded warrior somewhere who’s going to get some benefit from this,” said Navy Lt. Daniel Glenn, an Explosive Ordnance Disposal officer with EOD Mobile Unit, Joint Expeditionary Base Little Creek-Fort Story, Virginia. “That is the part that really keeps me engaged in the effort.”

Glenn ran the half marathon in a full EOD bomb suit, an added weight of 85 pounds, to help raise money for the EOD Warrior Foundation. This is Glenn’s second race he has completed wearing his bomb suit helping him raise nearly $25,000 for the foundation.

He also wants to show people what EOD is capable of; that they can thrive and survive no matter how hard it gets.

Others ran the half marathon for the team effort and the joy of running.

Ramm recently finished running seven marathons on seven continents in seven days in the World Marathon Challenge and wanted to get back into speed work. “I really just enjoy the day-to-day training, I think races for me are just apart of that,” Ramm said.

The participants not only ran 13.1 miles but also ventured through the Blue Mile and Hospital Hill.

The Blue Mile was a stretch of the course that was dedicated to service members who paid the ultimate price in service to their country. Dozens of signs lined the street with pictures and names of those were killed in combat operations. Numerous volunteers were holding American flags adorned with black ribbons, signifying the loss of a service member.

Hospital Hill is a 200-foot climb in elevation; the grueling task was located shortly before the finish at mile 10.

The first place finishers completed the course with an average pace of five minutes and 45 seconds per mile.

The top male was Mark Hopely, 27, a Fredericksburg native, who completed the half marathon in 1:11:06. The top female was Britta Ultz Baxter, 37, from King George, Virginia, who finished the race in 1:25:24. This was the second year in a row that Baxter took first place.

The next event in the Marine Corps Marathon series is the Run Amuck. This event will include a four-mile mud run, low crawls through mud pits and more than 20 obstacles on Marine Corps Base Quantico, Virginia. To register for the event, visit http://www.marinemarathon.com/events/run-amuck.