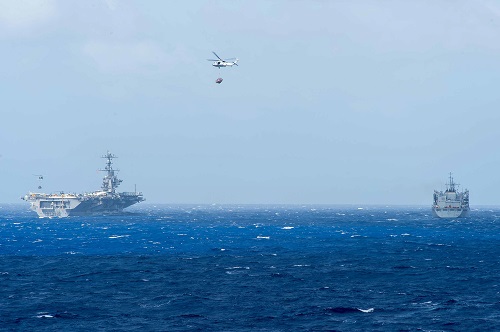 February 18, 2016, PACIFIC OCEAN (NNS) – The John C. Stennis Strike Group (JCSSG) may have deployed in January 2016 as the first carrier strike group powered with advanced biofuel, however JCSSG Sailors are also transforming energy use in other ways.

JCSSG, also known as the Great Green Fleet, has been replacing legacy shipboard lights with light emitting diodes (LEDs) on a number of ships in the group. USS Stockdale (DDG 106) reports over 90 percent complete with its transition.

“Since replacing all of our bulbs onboard, we have had to change only two of them out — one was dropped and one was bad before putting it in the fixture,” said Chief Electrician’s Mate Wesley Huizenga from Stockdale.

When LED light bulbs are installed, the ballasts and starters are removed from the light fixture. Some old fixtures have up to three ballasts. That reduction of regular parts replacement and minimization of hazardous material (HAZMAT) controls for the old bulbs’ mercury content, cuts workload quickly.

“The crew definitely prefers LED light bulbs,” said Huizenga. “[There is] less corrective maintenance on light fixtures, and they are so much brighter than the old fluorescent bulbs.”

The Great Green Fleet initiatives are ultimately intended to give ships the ability to stay on station longer, allowing them to accomplish a broader range of missions and tasking, giving better opportunities to respond to global needs which may arise.

“We have a responsibility to protect our Navy’s resources, and doing so increases our combat readiness,” said Lt. Cmdr. Loren Nichols, from Aberdeen, South Dakota, JCSSG logistics officer. “It’s as simple as turning off the lights in an unmanned space when you leave, and as complex as operating our engineering plants with advanced fuels in the most efficient manner possible. It’s most importantly a team effort across the entire strike group.”

The shift to LED lighting is just one more way JCSSG is showing its ability to make lasting changes in the way the Navy does business when it comes to energy conservation.

“This is about more than just saving gas,” said Nichols. “The Great Green Fleet is a mindset change across the board.”

The Great Green Fleet is a yearlong initiative, highlighting the Navy’s efforts to transform its energy use to increase operational capability. The principals behind the initiative direct the use of energy efficiency measures, to include technologies and operational procedures, and alternative fuel in the course of its normal operations.