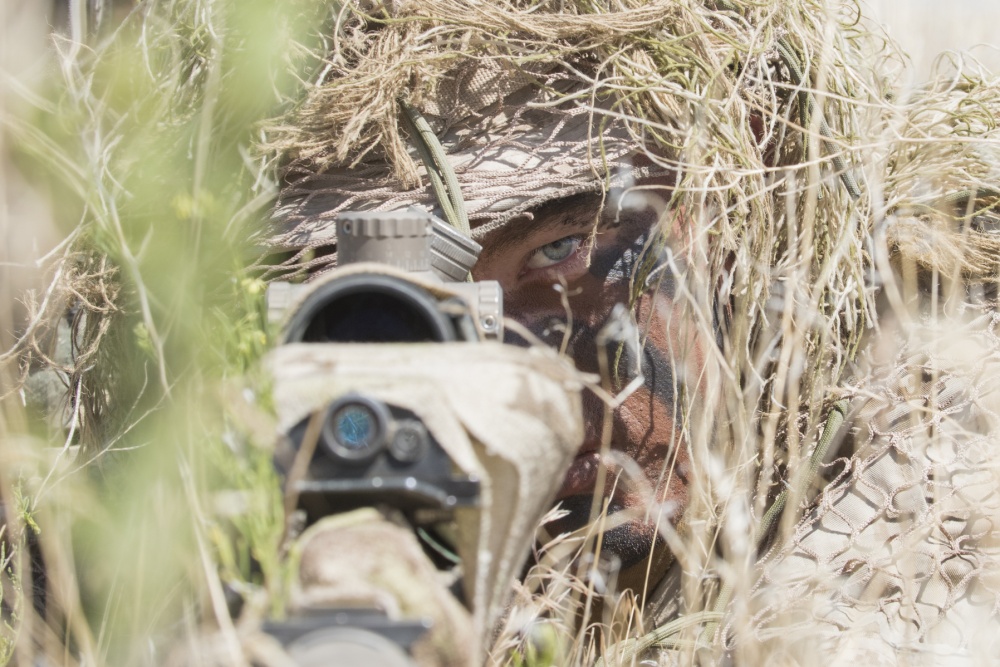 JUNE 15, 2018, Boise Air Terminal Air Guard Station, ID – Hidden beneath twigs and weeds, three snipers’ stomachs are flat on the ground, dirt and grime on their faces. It’s a 90 degree day. A drip of sweat rolls down into the lead sniper’s eye, stinging and smearing the camouflage paint down his face.

All that can be seen in the bundles of cheatgrass is a pair of steady, intense eyes. He does not blink. Complete silence and stillness. “I have eyes on the target,” faintly whispers Staff Sgt. Matt Koerner, lead sniper section sergeant. “Calling it in.”

The Idaho Army National Guard was recently tasked with forming a small sniper scout platoon, the first ever for the 2nd of the 116th Calvary Brigade Combat Team.

“It’s our very first sniper platoon for Idaho and one of the challenges is finding qualified individuals,” said Maj. Jason Gracida, 2-116 battalion commander. “Once we get them through sniper school, then they can come back and teach those younger future snipers.”

The job of a sniper requires extensive training, intense attention to detail, and complete discipline with stillness. He risks exposure if he moves too quickly. If a bug crawls onto his face, he has to resist the urge to scratch, as it tickles his skin.

The platoon, established one year ago, started with two previously qualified instructors. This year marks their first training in the field and coincides with the 116th Brigade’s two-week annual training at the Orchard Combat Training Center. The two qualified snipers have spent the previous year training the new platoon.

“Our instructors have done a fantastic job training the platoon, putting them through the ringer. Those two have worked tirelessly to get them ready for their first lane today,” said Gracida. “This is the first time they have ever actually employed sniper lanes, heading toward a certain area to begin their stalk.”

Stalking is a stealthy, exceedingly slow crawl. The sniper pays attention with an extreme amount of focus for details to remain undercover and hidden. Creeping slowly, inch by inch, can take up to two hours just to move ten feet. They wear a ghillie suit, which is a uniform sewn together with fabric resembling vegetation to blend in with their surroundings.

“It’s called vegged up. We grab weeds and sticks from the environment, cut them and attach them to the ghillie suit,” said Koerner.

Using high-powered optic binoculars and rifle scopes to scout the surrounding area, they will locate the high-value target and call the battalion commander to notify him that the target has been found, then wait for further instruction.

“Today they will go out and start their lane. It is a 2,000 meter stalk. They will ghillie suit up and basically low crawl through the dirt throughout the evening. By morning, they will have identified their target and call it in to me,” said Gracida.

Slowly reaching up with his hand, Koerner grabs a thick branch of sagebrush and pulls his body one inch closer for the final stages of movement. The team is now in a sniper’s hide where they can conduct their reconnaissance. They keep a log of their observations and sketch the terrain, painting a picture of enemy activity, before calling it in to their commander.

“The effective sniper team has to be able to move into an area, remain undetected, and report enemy activity. Get in and get out, unseen,” said Koerner.