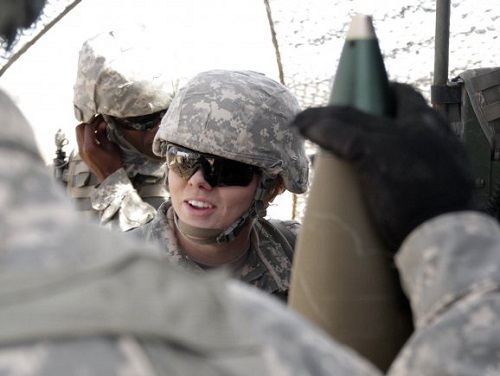 FORT SILL, Okla. (March 11, 2016) – It’s been a long time coming: Full-scale gender integration is now a reality in today’s military. Fort Sill is making sure the integration is as smooth as possible.

Although Defense Secretary Ashton Carter made it official, Jan. 2, opening the last remaining ground combat roles to women has been a hot topic for several years in what is known as the Soldier 2020 initiative to develop readiness standards.

“The Army felt like we were doing a disservice to readiness by looking only at the male population in certain combat (military occupational specialties) MOSs,” said Field Artillery Proponent Office Sgt. Maj. Alexis Shelton. “(Women) are driving trucks in some of the most dangerous areas in the world,” he said of the types of jobs female Soldiers are already performing.

“It’s about readiness,” he emphasized. “It’s making sure we have the right people, from all genders.”

In anticipation of the elimination of the last barriers to women, the Army Medical Command’s Army Research Institute of Environmental Medicine (ARIEM) had to figure how to accommodate women in an equitable way, and also how to reduce male injuries and washouts in advanced individual training (AIT).

It began a rigorous series of tests designed to codify the types of High Physical Demand Tests necessary to be successful in a combat specialty such as 13B cannon crewman.

ARIEM personnel were also at Fort Sill at the end of February working with Soldiers in basic combat training to help design the Occupational Physical Assessment Test (OPAT) for potential recruits to determine what MOS they can and can’t be trained in.

Shelton said some males are suffering injuries during training, or can’t meet the standards. “That gets back to readiness,” he said.

Before enlisting, recruits are given the Armed Services Vocational Aptitude Battery to measure cognitive or mental abilities, and must meet medical standards. However, there is no meaningful physical test that will help a potential Soldier be successful.

The OPAT would be the physical determinant of which MOS a recruit can be considered for, and is expected to be implemented by June 1. The four tests to measure lower-body strength, lower and upper body power, and aerobic fitness will be the standing long jump, the seated power throw, strength dead lift, and aerobic interval run.

“Once a Soldier takes the OPAT at the reception station, more than likely the Soldier would have no problem with the high physical demands (in AIT),” said Shelton. “We’ll have two assessments in place before a Soldier even signs the contract to be sure we have the right Soldier in the right MOS.”

All Soldiers in Fort Sill’s 13B cannon crewmember and 13F fire support specialist military occupational specialties need to pass specific HPDT tasks to graduate. Female Soldiers have been working with the Multiple Launch Rocket System and the High Mobility Artillery Rocket System for several years. They do not need to pass the HPDT because their jobs are mostly automated and do not involve high physical demands.

An AIT Soldier with C Battery, 1st Battalion, 78th Field Artillery, became the first female in the 13B MOS. Perhaps the hardest test was being able to move a total of 3,000 pounds of ammunition in 15 minutes, an action expected of a cannon crewmember in combat.

Pfc. Katherine Beatty of Inverness, Florida, had the advantage of being a power lifter with her Army infantryman husband, Charles, before enlisting. Beatty is a mother of a 2-year-old, and her success should lay to rest any doubts that women are capable of being part of a ground combat team. The next group of women scheduled for 13B training is due next month at Fort Sill.

Despite the standardization of HPDT and OPAT, there are still differences in the way men and women are scored on physical tests in basic combat training. “There’s a male and a female scale,” said Shelton. Forty sit-ups will earn a male a lower score than it does for a female, he said.

In addition to the physical requirements, the Army’s Training and Doctrine Command requires “safe and secure” housing for women.

Capt. Justin Lopez, C Battery, 1st Battalion, 78th Field Artillery commander, which is the AIT unit for 13B, said the goal is to have females housed in the same building as the rest of their team. One wing of that barracks is being remodeled to accommodate them. TRADOC requires that female housing has fire safe doors that lock from the inside, as well as closed circuit TV cameras in hallways and common areas.

“With fire safe doors, if an incident were to occur and they felt unsafe, they could hit a button and these doors would lock and no one could get in,” said Lopez.

When Beatty arrived as an AIT trainee a few months earlier than the expected first group of 13B women, she was housed in a separate barracks with other females. However, the rest of her training was exactly the same as that of the men.

“I keep going back to readiness,” said Shelton. “Because that’s what it’s about.”