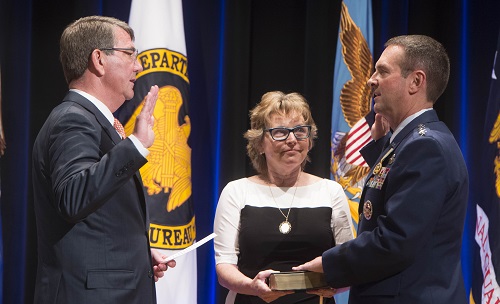 WASHINGTON, Aug. 4, 2016 – Citizen-warriors and the entire National Guard family are vital to the security of the United States, Defense Secretary Ash Carter said at the National Guard Bureau change-of-responsibility ceremony at the Pentagon today.

The days of the National Guard serving exclusively as a strategic reserve that was called up only in emergencies are over, Carter said.

“The post-9/11 environment has proven the Guard is an indispensable component of the Total Force, in day-to-day activities and large-scale operations, in planning and execution, and in conventional conflicts and novel threats,” he said.

“The presence, skill and readiness of citizen-warriors across the country give us the agility and flexibility to handle unexpected demands, both at home and abroad. It is an essential component of our total force, and a linchpin of our readiness,” Carter said.

That critical element the Guard brings to the Total Force is one reason why the Guard bureau chief position was elevated in 2012 to the Joint Chiefs of Staff level, the secretary pointed out.

“He”s helped increase our rapid deployment capability to respond to any crisis,” the secretary added, “and strengthened the Guard”s partnerships at the local, state, federal – and international – levels. He has been a strong and steady voice at the table for the men and women of the National Guard.”

The Guard keeps the skies free from danger, responds to disaster with compassion and professionalism at a moment”s notice and stands watch at home and abroad, Carter said, telling Guard members, “You responded when we needed you during the conflicts in Iraq and Afghanistan all those years.”

Those qualities have been the spirit, mission and enduring commitment of the Guard through the centuries, “and never more so than over the past 15 years,” Carter noted, adding, “Since Sept. 11 [2001], the men and women of our Army and Air National Guard, and their families, have answered the nation”s call to deploy over 787,000 times.”

Today”s Guard is battle-tested and is an agile, flexible, deployable force with combat experience and a broad range of skills gained both on the battlefield and in civilian life, and confronts the challenges of today”s complex world, the secretary said.

“As history has shown that we can never perfectly predict the strategic future, we must also be flexible and agile in preparing for unknowns that we can”t anticipate today,” Carter said.

“As chief of the National Guard these past four years,” he told Grass, “you”ve been a courageous and skillful leader – exactly the one the nation needed, and you”ve seized every opportunity to make progress, and our Total Force is stronger as a result.”

The National Guard family will remain in the good hands of another proven strategic thinker in Grass” vice chief and new bureau chief, Lengyel, the secretary said.

Perhaps most importantly, Carter said, Lengyel “knows what it means” to be a military family member after his military pilot father was shot down in Vietnam and became a prisoner of war in 1969, only to return to service there as just one of two former POW pilots in 1975.

“We cannot predict how, or when, or where, the men and women of our National Guard will be called on to serve their fellow citizens,” the secretary said, adding that because of Grass” strong leadership, the National Guard is an indispensable force, trained and ready to respond wherever it”s needed.

“We know that General Lengyel will lead this force with certainty, clarity and the full confidence and trust of myself and the president,” Carter said, thanking both leaders and all National Guard members for remaining “Always Ready, Always There.”