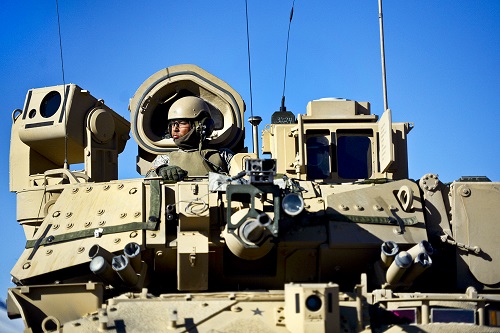 MARCH 21, 2017, HUNTSVILLE, Ala. (Army News Service) – The Army is refining how it envisions Soldiers will move around in future combat zones, while an execution plan is now underway for the service’s next ground combat vehicle.

The Army is getting ready to release its maneuver force modernization strategy this summer, leaders say, after its underlying maneuver concept was signed off last month.

“If this is to work … industry and the entire enterprise need to understand the concept because the concept is the lens in which we build the future force. It gives us an azimuth to where we’re going,” said Maj. Gen. Eric Wesley, commander of the Army Maneuver Center of Excellence, which is tasked with crafting the future requirements of maneuver forces.

The maneuver concept, which was developed simultaneously with the Army Training and Doctrine Command’s overall multi-domain operating concept, describes how Soldiers will fight against threats in the 2020-2040 timeframe.

The main theme is that Soldiers would be called upon to juggle capabilities in the land, air, maritime, cyber and space domains while maneuvering in a contested environment.

The concept also draws ideas from TRADOC’s Russian New Generation Warfare Study, which looked at how the Russian military has fought in Ukraine using capabilities such as electronic warfare, long-range artillery and unmanned aerial systems.

A more complex battlefield being predicted by planners would also require new combat vehicles, which had its own strategy released in 2015 and is now being carried out.

“What we’re building now is the execution plan associated with that,” Wesley said at the Association of the United States Army’s global force symposium Wednesday. “In other words: decision points, decision space, [and issuing] criteria, so we can pull the levers to get money into the right categories to actually do something.”

Army leaders are targeting two sets of plans for vehicles. One is a set of light infantry vehicles with more mobility and firepower that includes the ground mobility vehicle, the light reconnaissance vehicle and a mobile protected firepower vehicle.

The other is the next generation combat vehicle, which is being considered for the long term, with a cross-functional integrated concept development team planning to study it this year, according to Army officials.

But with no ground combat vehicle currently in development, the M1 Abrams tank and Bradley fighting vehicle are likely to be the Army’s workhorses for decades to come.

“M1 and Bradley take us out to 2050,” Wesley said, “which is not sustainable if you want a weapons system that’s going to be dominant.”

One requirement for future combat vehicles, according to the maneuver concept, is to reduce the logistics demand associated with those vehicles, since units may have to execute missions semi-independently and in contested environments for up to a week.

An example of reducing that logistics load might be to ensure the vehicle can go longer between refueling. To accomplish this, future vehicles could weigh up to 50 percent less than current vehicles. They would be be built with lighter materials, new joining techniques and innovative protection systems that weigh less than today’s armor.

The issue of demand reduction should be looked at more holistically since there are several areas where it can be achieved, according to Maj. Gen. Cedric Wins, head of the Army Research, Development and Engineering Command.

Autonomous systems could lighten platforms and the loads of individual Soldiers, while improved energy efficiency could allow vehicles to operate longer and travel farther, he said.

“We can’t constrain our thinking,” Wins said. “We have to keep our range of thoughts and ideas a little bit broader.”

Partnerships must also be strengthened to prevent overreach, he said, so those working on how the Army will fight in the future know where technology is at now and where it is heading.

“We have to be willing to collaborate not only with industry and academia but also within the Army,” he said.