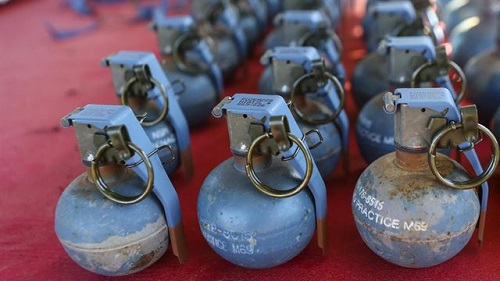 The unit practiced throwing inert (dummy) grenades for most of the morning before advancing to the live grenades in the afternoon.

Inert grenades are a safe training tool because they are hollowed out and do not explode. They mimic a live grenade’s explosion by producing a small audible pop from a timed fuse. This process reinforces the time constraints associated with live-grenades before actually employing the lethal look-a-like.

The morning training evolution consisted of Marines in groups of two, working together and communicating to suppress simulated enemies.

“If you are taking a massive amount of fire from one area, a round can only do so much if you are using your M-16 and don’t have crew served weapons like an M-240B,” said Sgt. Dereck Busby, a platoon leader with the unit. “This can, if it doesn’t hit them on target, definitely deafen [the enemy], make them more scared, and more intimidated by the force that is coming at them.”

As part of the grenade battle drill, the groups executed a buddy rush down a lane using tactical bounding techniques with training rifles and called out their shots simulating suppression of an enemy. The other Marine prepared his dummy grenade and threw it at the target area.

They took turns advancing on the position until they reached the target and confirmed that the threat was neutralized. They bounded back and switched roles on the next round to let every Marine practice throwing the inert grenades.

Marines practiced the bounding techniques all morning as well as reviewed the standard operating procedures for the range in preparation to throw live grenades in the afternoon.

“We used the M67 fragmentation grenade, which is the basic combat grenade,” said 1st Lt. Jordan Fox, the executive officer for Charlie Company. “The last time the Marines threw this was in [Marine Combat Training] school.”

Each Marine was given several opportunities to enhance their abilities with the small and deadly weapon before the end of the training day.

The primary mission of 2nd LEB is to conduct law and order operations in order to enhance the security environment and promote the rule of law in support of Marine Air Ground Task Force (MAGTF) operations.