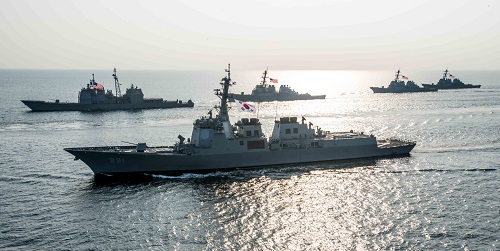 OCTOBER 17, 2016, WATERS OFF THE KOREAN PENINSULA (NNS) – In the midst of a demanding U.S. 7th Fleet area of responsibility (AOR), Destroyer Squadron (DESRON) 15 is maintaining a high level of excellence by participating in joint exercises and projecting power across multiple warfare areas, while operating with Korean and other U.S. forces.

“Our job as the premier, forward-deployed naval forces for the United States is to be trained and ready for anything that may come our way,” said Capt. Jeff Bennet, commodore of DESRON 15. “Our ships and our crews maintain the highest level of readiness through joint and bilateral training with our allies and partners in the region and training with the other services.”

“Invincible Spirit is a biannual exercise conducted with the Republic of Korea (ROK) navy to improve interoperability and maintain a credible combat power with our ally,” said Lt. Daniel Hawethorne, a tactical action officer aboard John S. McCain. “Our ship in particular did multiple drills and exercises with the ROKs, and it helped validate certain procedures we use so we are able to work together seamlessly.”

“Although the staff conducts duties as sea combat commander from the carrier, DESRON 15 utilized distributed command and control of our ships across the KTO in order to support Invincible Spirit,” said Lt. Cmdr. Richard Ray, operations officer of DESRON 15. “Our ability to operate and integrate seamlessly with our ally, no matter where we are, is imperative and directly increases our operational capability within the region.”

While participating in rigorous exercises like Invincible Spirit and the U.S.-only exercise Valiant Shield in September, all DESRON units simultaneously maintain their normal warfare areas of expertise, including surface and subsurface warfare to defend aircraft carrier USS Ronald Reagan (CVN 76).

“Even though some of our ships are participating in Invincible Spirit with the Korean navy, we still have to maintain an accurate, real-world surface, air and subsurface picture,” said DESRON 15 staff member Lt. Rachel Thomas, a subsurface warfare specialist. “Our ships have to find a balance between real-world operations and training, and the DESRON staff helps manage the assets of the strike group.”

“It’s tough sometimes to manage expectations of training and exercises, and then still get the real-world job done for DESRON and ultimately the admiral,” said Petty Officer 1st Class Timothy Irving, a combat watchstander aboard Barry. “But that is a part of being forward deployed. We are ready to fight tonight if called upon.”

DESRON 15 provides a combat-ready force that protects and defends the collective maritime interests of the U.S. and its allies and partners in the Indo-Asia-Pacific region.