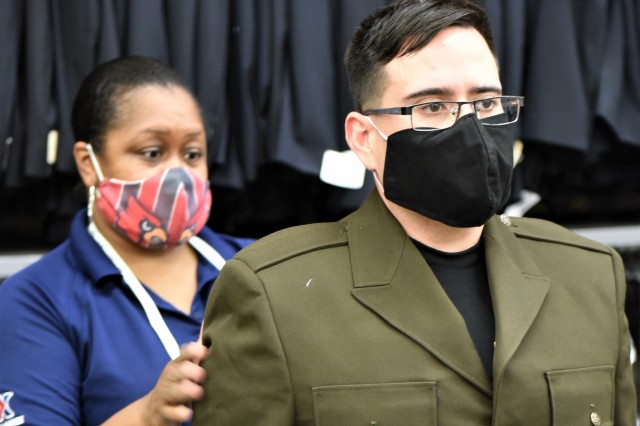 JULY 14, 2020 – A line formed inside the Fort Knox Military Clothing Sales store July 8 as several recruiting students anticipated being the first to be issued the Army’s newest uniform — the Army Green Service Uniform.

Considered a nostalgic nod to the greatest generation — who fought in World War II — the green and beige uniform has caused strong reactions in civilians and Soldiers alike.

In Week 4 of the six-week recruiter course, the 70 Soldiers attending were divided into two groups so Army & Air Force Exchange Service personnel could effectively issue all pieces of the uniform set. The set issued to the recruiters includes a service coat, two pairs of pants, a long-sleeve and short-sleeve shirt each, a pair of shoes, socks, tie, belt, gloves and the distinctive cap.

“This uniform goes back to our historical identity,” said Wills. “When I was out recruiting and wore the Army Service Uniform, a lot of times I was asked if I was in the Air Force. Whereas, I believe these are a little truer to who we are.”

Already a recruiter in Fort Smith, Arkansas, Sgt. Rochelle Walsingham said she was excited to be part of the class that gets the uniform. She noted some differences from other uniforms.

“It’s a little heavier than the other ones. The jacket’s a lot heavier and more durable than other jackets are,” she said. “But the AGSUs are more form-fitting for the females. That was a big problem for the ASU for the females. These actually fit more to your form, and we were told you are able to take them out more or bring them in more, so it helps a lot.”

She said when her unit found out she would be one of the first to get issued the new uniforms, they wanted her to take some pictures.

Fort Knox first to issue Army’s new World War II-style uniforms
Emmanuel Belt, the Fort Knox Military Clothing Sales store manager, said they found out in April that Fort Knox would become the first to receive the uniforms. Excitement at the installation has been building since.

“I’m really surprised at how much enthusiasm there is with this uniform,” said Belt. “I thought people wouldn’t want to spend any more money on uniforms, but they all really want this uniform. And it looks great, too.”