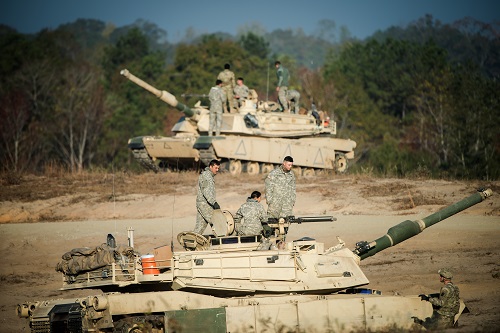 “Today’s gender-integrated graduation represents an important personal and organizational milestone,” said Brig. Gen. John Kolasheski, chief of Armor and Armor School commandant. “[But] it also demonstrates our unwavering commitment to train and educate the right Soldiers for the right job so they and their organization can fight and win anytime, anywhere, and under any conditions of battle.”

The 95-day course prepared young Armor officers to lead a mounted platoon by ensuring they are physically fit, mentally agile, technically and tactically proficient, and capable of directing the decisive operations of a combined arms team.

“I am proud to be an Armor officer and I am grateful to have had the opportunity to earn my place in an Armor community that values equality and fairness,” said one of the first woman graduates of the course.

During the training, the students received the foundation needed to plan offense, defense, and reconnaissance and security operations. The first phase of the course ended with a week of marksmanship focused on the M4 rifle and M9 pistol.

“We are professional, competent Armor officers who are prepared to lead platoons in a talented, integrated Army,” said one male graduate and future tanker.

The officers conducted training on the Abrams M1A2 Tank and the Bradley Fighting Vehicle, learning the technical aspects and the weapon systems. Students also demonstrated their skills through a gunnery skills test and through other simulations.

The Soldiers then conducted an Abrams and Bradley live fire exercise and ended the training phase in the close combat tactical trainer, where they ran simulated tank platoon missions in preparation for mounted maneuver training.

“I am an armor officer who recognizes that equality makes us stronger, diversity makes us better and talent knows no gender,” said another graduate and future scout.

After completing a Competitive Maneuver Exercise, the course closed with a four-day combined competitive maneuver exercise that tested the officers on all aspects of leading a mounted platoon.

“Now more than ever you’ll find an Army that values small unit leaders like the ones you’re about to become,” said retired Lt. Gen. Guy C. Swan III, former commanding general, Army North/Fifth Army, and keynote speaker for the graduation.

“You’re well trained, well prepared and ready to do it.”