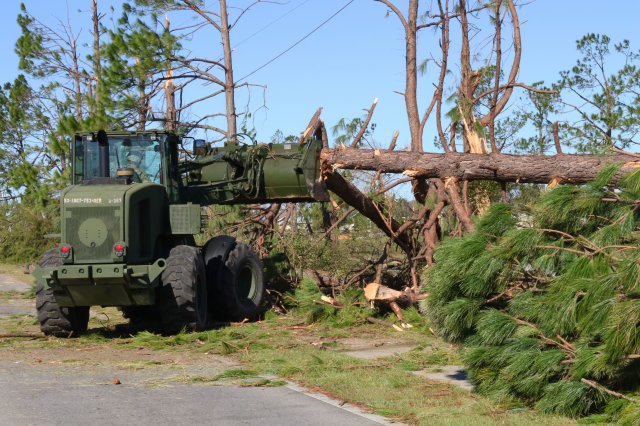 OCTOBER 15, 2018, Panama City, FL – “Seeing all the people here that are in dire need of our help… this is what we signed up to do.” said Florida National Guard Spc. Thomas Brinsko, a Soldier of Alpha Co. 753rd Brigade Engineer Battalion in Tallahassee, Florida.”

Brinsko, along with the 753rd, is taking part in a route clearance mission in Panama City that is allowing local residents to pass through areas that were blocked off by fallen trees and other debris.

“This is why I joined the National Guard over other options because I knew that we had a state mission here,” Brinsko said. “I grew up in Florida, and we’ve all been affected by hurricanes one way or another if you’ve lived here long enough.”

Brinsko, a Gainesville, Florida, native, and Gainesville police officer, left his home to come out to assist those in the panhandle community affected by this disaster. This is his third hurricane activation in the two years that he has been in the Guard.

Prior to joining the military, Brinsko was personally impacted by hurricanes.

“Hurricane Charley in 2004 sat over Gainesville, and we had a lot of flooding,” Brinsko said. “Even then we saw the National Guard come in and all the emergency services come in. You knew that there was someone there to help and that you weren’t on your own.”

The Florida National Guard continues to demonstrate its preparedness in response to the swift arrival of Hurricane Michael.

Hunter, Brinsko and the rest of the unit left their loved ones, jobs and struggles back home to put the needs of Florida residents first.
“The Soldiers that are here genuinely want to be here,” Hunter stated.

Hunter said some Soldiers that are not here wish they could support this mission, but were challenged with family struggles back home.

“One has a dad that has a heart condition; she went to the emergency room,” Hunter said. “One had a child who was sick with a fever and had to go to the hospital.

“It’s a case by case just to balance what’s best for the Soldiers and still be able to accomplish our mission.”

Despite the hardships, the Florida National Guard still has boots on the ground and are assisting communities across Florida as directed by the Governor and the Division of Emergency Management.

The Guard is mobilized with nearly 3,000 Soldiers and Airmen activated, and up to 3,500 total authorized for response efforts. Missions continue to protect the lives and property of Florida residents and guests.

“This affected my decision to join the Guard,” Brinsko said. “They help and are willing to leave behind everything- their own personal lives, their jobs and school.

“Knowing that someone cares about you enough to be able to come and help… now that really means something.”