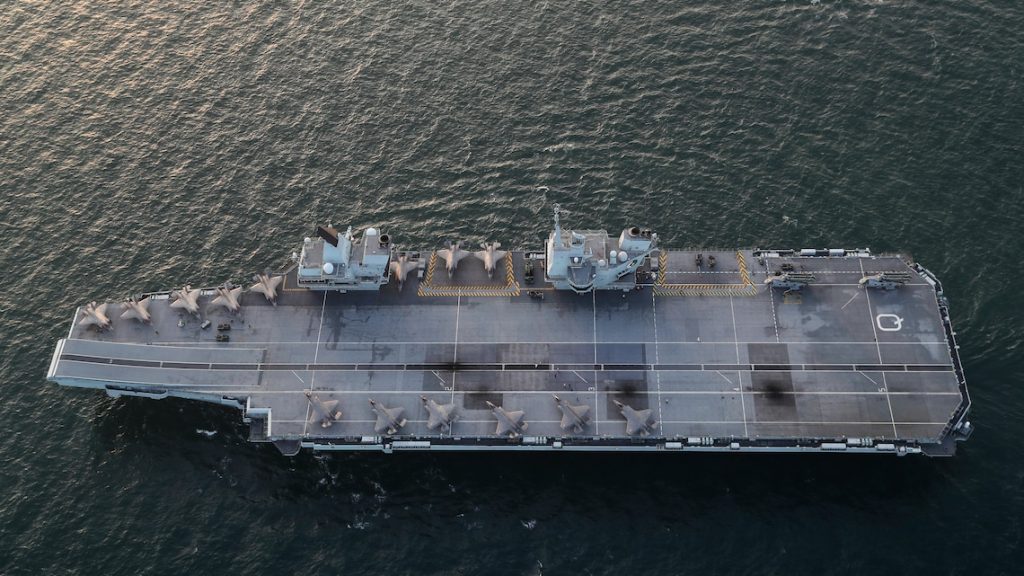 SEPTEMBER 25, 2020 – Marine Fighter Attack Squadron 211 embarked 10 F-35B Lightning II Joint Strike Fighters onboard Her Majesty’s Ship Queen Elizabeth September 22 as part of the squadron’s multi-month deployment for training to the United Kingdom. “The Wake Island Avengers” are proud to represent the United States Marine Corps and United States of America while they serve as part of the UK’s Carrier Strike Group.

“HMS Queen Elizabeth will be operating with the largest air group of 5th generation fighters assembled anywhere in the world,” said Commodore Steve Moorhouse, Commander UK CSG. “Led by the Royal Navy, and backed by our closest allies, this new Carrier Strike Group puts real muscle back into NATO; and sends a clear signal that the United Kingdom takes its global role seriously.”

VMFA-211 joined the UK’s 617 Squadron “The Dambusters” onboard the 65,000-ton carrier as she sailed for exercises with NATO allies in the North Sea. This month’s overarching UK-led Group Exercise will see VMFA-211, 617 Squadron and HMS Queen Elizabeth joined by six Royal Navy destroyers, frigates and auxiliaries, ready to fight in any clime or place.

In addition to these forces, the UK CSG will be joined by warships from the Royal Netherlands Navy and US Navy to form the largest UK-led multi-national force in recent years, which will accompany HMS Queen Elizabeth on her global, inaugural deployment in 2021.

“This is the Special Relationship in action.” said Robert Wood Johnson, U.S. ambassador to the United Kingdom, “Our forces train, fight, and win – side by side – to protect our two countries.”

Before the deployment, the CSG will be put through its paces off the north east coast of Scotland as part of Joint Warrior, NATO’s largest annual exercise. Joint Warrior will be an opportunity for the CSG to exercise the capabilities of 15 5th generation F-35Bs flown by VMFA-211 and Squadron 617. The F-35B combines next-generation fighter characteristics of radar-evading stealth, sensor fusion, fighter agility and advanced logistical support with the most powerful and comprehensive integrated sensor package of any fighter aircraft in history, providing unprecedented lethality and access to highly contested environments.

“This deployment demonstrates that our forces are more than interoperable—we are integrated.” Col. Simon Doran, Senior National Representative to the UK CSG

“During this special partnership, the US Marine Corps and US Navy will conduct carrier strike group operations, training to maritime power projection, and ultimately supporting shared security,” said Doran. “Our alliance is stronger because we can deploy and fight together as truly integrated NATO allies.”

This exercise is a historic moment for the United Kingdom and the United States which strengthens the special relationship between the two countries. For the UK, it will be the largest air group to operate from a Royal Navy carrier since HMS Hermes in 1983; as well as the next step leading toward HMS Queen Elizabeth’s worldwide deployment this spring. For the United States, it is the first time a squadron of 5th generation aircraft will be deployed aboard a foreign vessel and will prove that the “Wake Island Avengers” are ready to conduct operations in support of NATO.

The “Wake Island Avengers” made history in 2018 when the squadron completed the first F-35B combat deployment, successfully supporting ground operations in Central Command’s area of responsibility.

“The Wake Island Avengers are ready in all respects to work with the British sailors and aircrew onboard HMS Queen Elizabeth,” said Lt. Col. Joseph Freshour, the commanding officer of VMFA-211. “We are looking forward to deploying alongside our British counterparts.”

VMFA-211 deployed for training to Royal Air Force Station Marham in the early evening of 03 September 2020. The pilots flew from Marine Corps Air Station Yuma, Arizona to MCAS Beaufort, South Carolina, and then onto RAF Mahram, a distance of 5500 nautical miles. Since then, VMFA-211 has been conducting realistic, relevant training at RAF Marham with “The Dambusters.”

While serving as part of the UK Carrier Strike Group, VMFA-211 will use innovative techniques to combine efforts and resources while collaborating on complex mission sets to maintain our Nations’ global maritime military advantage. The Navy-Marine Corps team is humbled and proud to represent the United States and continue the special relationship with the United Kingdom in support of shared security.