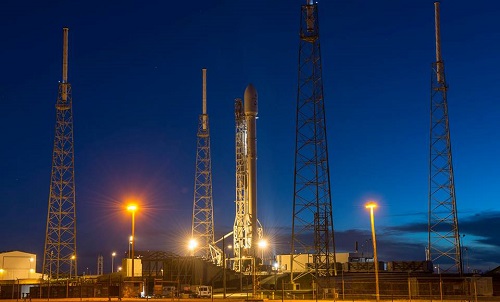 The Falcon 9 rocket is carrying the JCSAT-16 communications satellite built by Space Systems Loral for Tokyo-based SKY Perfect JSAT Corp. JCSAT-16 will be a backup satellite for Ku-band and Ka-band communications services over the Japanese market.

A combined team of military, government civilians and contractors from across the 45th SW supported the mission with weather forecasts, security, safety, public affairs, and launch and range operations. The wing also provided its vast network of radar, telemetry and communications instrumentation to facilitate a safe launch on the Eastern Range.

“I am very proud of the entire Space Coast team. Their flawless work made this mission a success,” said Col. Walt Jackim, the 45th SW vice commander and mission launch decision authority. “Assured access to space remains a difficult and challenging endeavor. Today’s launch reflects a superb collaborative effort between commercial launch providers, allied customers, and U.S. Air Force range and safety resources. The 45th Space Wing remains a proud member of the space coast team and we look forward to continuing our service as the ‘world’s premier gateway to space.’”