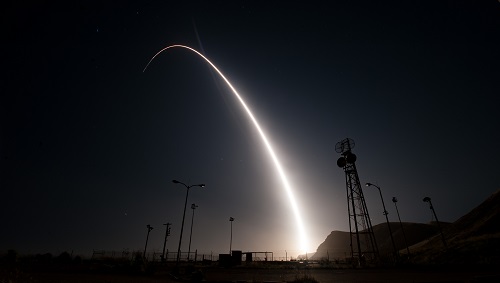 The missile used in GT220 launched in the early hours of the morning with a launch command delivered from the Air Launch Control System on a Navy E-6 Mercury jet.

The ICBM’s re-entry vehicle, which contained a telemetry package used for operational testing, traveled to the Kwajalein Atoll in the Marshall Islands, approximately 4,200 miles away from the launch site. Test launches verify the accuracy and reliability of the Minuteman III ICBM weapon system, providing valuable data to ensure a continued safe, secure and effective nuclear deterrent.

“I can’t say enough great things about the partners I share this mission set with,” said Col. Craig Ramsey, the 576th Flight Test Squadron commander. “The men and women from the task force, the Airmen from my squadron, and our host unit here at Vandenberg made this look easy, but it was anything but that. It’s a testament to the dedication and professionalism of these proud organizations. I’m proud to play a small part in it.”

F.E. Warren AFB is one of three missile bases with crewmembers standing alert 24/7 year-round, overseeing the nation’s ICBM alert forces. The Minuteman III is one of three legs of the nuclear triad, which is also comprised of strategic bombers such as the B-52 Stratofortress and B-2 Spirit, as well as submarine launched ballistic missions, provided by Navy submarines.

“I’m extremely proud of the 16 maintainers and operators from the combined 90th Missile Wing and 341st Missile Wing Task Force who worked hand in hand with the 576th FLTS to make this launch possible,” said Lt. Col. Tony Rhoades, the task force commander. “This mission requires a tremendous amount of discipline, training and attention to detail. Our Airmen demonstrated this with true professionalism and proved that the Minuteman III remains the nation’s premier deterrence and assurance capability.”

The ICBM community, including the Defense Department, the Energy Department, and U.S. Strategic Command uses data collected from test launches for continuing force development evaluation. The ICBM test launch program demonstrates the operational credibility of the Minuteman III and ensures the United States’ ability to maintain a strong, credible nuclear deterrent as a key element of U.S. national security and the security of U.S. allies and partners.

The combined team of AFGSC Airmen were from the 90th MW at F.E. Warren Air Force Base, Wyoming; the 341st MW at Malmstrom AFB, Montana; and the 625th Strategic Operations Squadron at Offutt AFB, Nebraska.