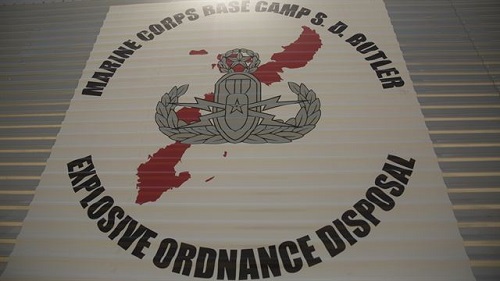 The training ensured EOD technicians were proficient in the safe long-distance detonation of explosives, using the SASR-M107 sniper rifle.
This method of detonation is one of the most preferable, especially when forward-deployed, as it minimizes the possibility of casualties while performing essential clearing of explosives, according to Capt. David P. Karr, an explosive ordnance disposal officer with Headquarters and Support Bn.

“When disposing of explosive ordnance, the remote procedure is usually the best procedure,” said Karr, a Plano, Texas, native. “It’s another tool in the bag of many techniques we use to safely dispose of ordnance, preserve order and save lives.”

EOD technicians placed 155mm rounds on the hillside of the range to serve as targets. After placing the rounds, the Marines made their way back to the sniper tower and began familiarizing themselves with the weapon system.

“As a reconnaissance Marine, I wasn’t familiar with the idea of detonating explosives from a distance using the M107,” said Cpl. Seth M. Richardson, a scout sniper with 3rd Reconnaissance Battalion. “This training provided a valuable opportunity to exchange knowledge with the EOD technicians who weren’t as familiar with the weapons system. We practiced the basic shooting fundamentals and we learned about what they do in their own military occupational specialty.”

The EOD technicians loaded their weapons and sighted in on their targets. Once their targets were specified, they were given the command to fire.

“We train with our sister unit, Marine Wing Support Squadron 172 quite a bit,” said Karr. “The 3rd reconnaissance scout snipers were the subject matter experts with the precision weapons and were able to provide guidance to the EOD technicians to help them sharpen their skills on the weapons system.”

When the training concluded, the Marines climbed down from the tower to perform weapons maintenance and discuss the training.

“One of my favorite parts of my job is how much we learn from each other,” said Richardson, a Carbondale, Illinois, native. “There are so many different jobs within in the infantry field, let alone throughout the Marine Corps. The Marines here today are from different units and have different experiences and areas of expertise, and today we are all walking away more confident in our abilities to train and execute our mission.”