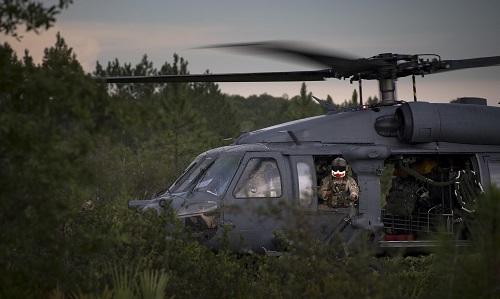 During months of planning between Tyndall Air Force Base, Florida and Moody AFB, Georgia., Exercise Stealth Guardian was conceived and executed by Airmen from both wings to explore Air Force capabilities in modern rescue scenarios to integrate rescue and 5th generation assets in a deployed or contingency environment.

The exercise tested the capabilities of Rapid Raptor which is the Air Force’s ability to employ agile combat capabilities of 5th generation platforms like the F-22 Raptor to a combat or contingency environment at a moment’s notice.

“Stealth Guardian started after a rapid rescue and Rapid Raptor exercise we conducted at Langley AFB this past May. Leadership from the different wings, specifically the leaders at Tyndall AFB wanted to integrate with rescue as well,” Maj. Tom, Exercise Stealth Guardian planner and 347th Operations Support Squadron, assistant director of operations. “They saw an opportunity to integrate Rapid Raptor with rescue because of the capabilities of the HC-130Js.”

Tom also added that the ability to integrate with Air Force rescue assets allows for better crossflow communication and it improves the ability of Raptor operators to affect their own recovery and be the on-scene commander.

“From a survivor’s perspective, I know that I am going to be much better prepared as a survivor on the ground understanding how the process works,” said Maj. Ryan, 95th Fighter squadron F-22 Raptor pilot.

In addition to being able to tailor learning objectives, Stealth Guardian allowed for 4th generation platforms to better integrate with 5th generation.

“I think integrating and speaking between older technology like 4th generation and 5th generation assets is crucial,” said Tom. “Anytime you can figure out how to make those assets effect their own recovery or how to effect the recovery of any coalition personnel is going to be crucial.”

For the 23d Wing there were several successes that occurred during Stealth Guardian. According to Tom, the 347th Rescue Group was able to successfully integrate into the Rapid Raptor capabilities as well as prove that they could stand up a personnel recovery task force with a minimal footprint.

Additionally, during the exercise F-22 Raptors were able to demonstrate the capabilities of Rapid Raptor by operating out of Moody AFB.

The Rapid Raptor capabilities were also enhanced by an HC-130J Combat King II from the 71st Rescue Squadron. For the first time an HC-130J was successfully able to execute a forward area refueling point with an F-22. The execution of this FARP further enhanced the ability of Rapid Raptor to be successful.

“We identified a lot of differences between the HC-130J and the MC-130 (which was used in a previous exercise) when it comes to the equipment and the way Air Combat Command assets do things compared to Air Force Special Operations Command,” said Ryan. “It’s a big deal because it’s different than anything we have ever done before. It has helped us refine our tactics, techniques and procedures and identify creative solutions to help handle those friction points.”

Exercising the Rapid Raptor concept with the HC-130J resulted in Airmen finding a creative solution to an issue with loading needed equipment onto the aircraft. By identifying the issue now Airmen at Tyndall are working to develop a piece of equipment that will allow the Rapid Raptor mobility piece to work on any C-130J variant.

“Solving those types of problems is significant for us because it allows us to lean the process. So next time regardless of if it is a HC-130J or a C-130J we can make it happen,” said Ryan.

Overall the exercise was very successful according to Tom and he envisions that similar exercises in the future will only make things better.

“There are certainly lessons learned that can be applied to future exercises or even for those guys going down range when it comes to mission planning across the board,” said Tom.

*Editor’s note: Full names have been left out for operational security purposes.