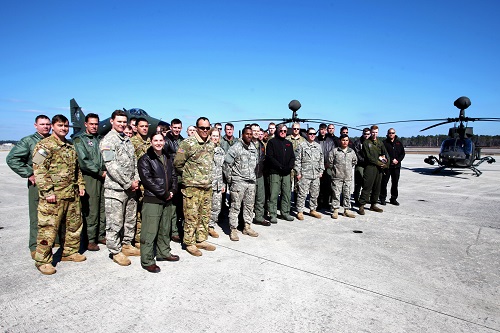 “We are all here contributing to VMFA-533 so they can complete their Forward Air Controller Airborne qualifications and get their readiness levels to a deployable status,” said retired Marine Corps Lt. Col. Jeff Scott, director of Marine Corps operations with a civilian contracting company.

“Our A-4 Skyhawk supported VMFA-533 by being a close air support fixed-wing platform that they controlled,” explained Scott. “Utilizing our aircraft instead of the squadron’s helped to relieve some of the burden so they could focus the training on other components of their mission.”

One aircraft put into play during the exercise was the Army’s OH-58 Kiowa, which added more variety to the combat simulations.

“We laid down suppressing fire with the Kiowa so our medical evacuation asset could land in a simulated hot zone,” said Army Maj. Margaret Stick, Kiowa pilot and operations officer for 1-17 Cav. “It was made possible by having the joint terminal attack controllers on the ground identify the potential landing site for the medical evacuation insertion.”

From the Army’s perspective, Coastal Predator allowed soldiers to understand and practice the joint terminology and aided integration for the Army into the collective operational picture, explained Stick.

“Anytime you are supporting someone or being supported by someone, it is going to strengthen your bond,” said Maj. William V. Backlund III, operations officer for VMFA-533. “It’s the way the Marine Corps operates. We have the fixed-wing supporting the ground scheme maneuvers and vice versa.”

During Coastal Predator, an example of the Air Combat Element and Ground Combat Element coming together was displayed in the integration of the Hornet’s hot-loading procedure, explained Backlund.

Hot loading, aka hot rearming, is a reloading procedure completed while the aircraft’s engine is still running, drastically reducing the time to get back in the fight.

“Close Air Support, armed reconnaissance, and Forward Air Controller Airborne, are just some of the mission sets we need to utilize to be proficient as a squadron,” explained Backlund. “These are very advanced skills that take many assets. Given the personnel participating in Coastal Predator, it allowed additional active duty Marines to train and focus on more mission critical tasks.”

In addition to conducting pre-deployment training for VMFA(AW)-533, the exercise was designed to support EWTGLANT with close air support for their tactical air control party fires exercise.