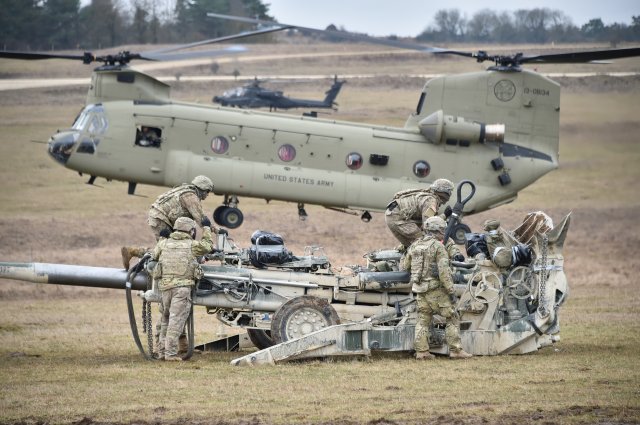 MARCH 20, 2018, Washington D.C. – Russia is using all aspects of government power to overthrow the existing international rules-based infrastructure and especially trying to subvert NATO, Army Gen. Curtis M. Scaparrotti said during a roundtable with reporters at the Pentagon Thursday.

The general is dual-hatted in Europe as the commander of U.S. European Command and NATO’s supreme allied commander for Europe. He has been in Washington testifying before Congress on the situation in Europe.

The command’s mission includes deterrence and defense of the European theater. A decade ago, this looked like a mission that was going away. Russia seemed to be embracing the rules-based international norms and moving toward economic inclusion on the European continent.

Then came Russia’s invasion of Georgia in 2008 and its illegal annexation of Crimea from Ukraine in 2012, followed by continued conflict in Eastern Ukraine. Russia flexed its muscles using cyberattacks against Estonia in 2007 and used computers to infiltrate electrical grids throughout Western Europe and North America.

Through all this, Russia used disinformation to subvert solidarity inside and among countries. Russia also launched widespread efforts to interfere in democratic elections.

Russia also likely launched a nerve agent attack against a former spy in Great Britain last week. The United States joined Great Britain, France and Germany in condemning the incident as an attack on national sovereignty.

DISINFORMATION
“Russia is consistently using disinformation in Europe,” Scaparrotti said. “Within EUCOM itself and also within NATO … we have structures that work on information operations.”

This includes information operations channels in the military and the U.S. State Department. These contacts run through NATO and the European Union as well as through individual countries.

This web of contacts serves to counteract Russian propaganda, he said. “All of this really is about being truthful and factual about the news,” the general said.

Western nations also need to underscore the importance of democratic values, appropriate democratic government, freedom of speech, individual rights and all that these entail, “because Russia’s disinformation campaign is largely centered on undermining the West, our way of life, our rules-based structure,” Scaparrotti said.

The military aspect of this effort plays a really small part, the general said. “Most of this is the connections with our [public affairs] and diplomacy and their messages to ensure we all know the environments and what the facts are,” he said.

The general said he has noticed a difference in coverage in just the last year. Western leaders see the Russian disinformation and understand they have to quickly respond. They know how to track down the truth and how to work together to counteract the disinformation. “They know how to work together on a response to something,” Scaparrotti said. “You get a little faster, you work more closely together, you get facts out a little bit quicker.”

GETTING AHEAD OF ATTACKS
NATO and EUCOM are trying to anticipate Russian disinformation attacks. The general said the commands were particularly successful during the Enhanced Forward Presence effort following the Warsaw Summit in 2016. These EFPs are multinational battle groups in the Baltic countries and Poland. Their mere presence signifies NATO’s determination to defend all nations in the alliance, defense officials have said.

When the effort began, NATO officials were sure that the Russians would try to discredit the Enhanced Forward Presence. “That’s what we thought, and sure enough, that’s what they tried to do,” Scaparrotti said.

In advance, the alliance put out a framework of key messages and had a tabletop exercise that included public affairs and information operations specialists from all the entities and countries involved.

When the Russians launched their disinformation effort, NATO and the individual countries were prepared and responded within hours. “In the end, it’s the country you are in that makes the decision about how you are going to react,” the general said. “But it brought the entire group to bear on it and allowed us to get speed.”