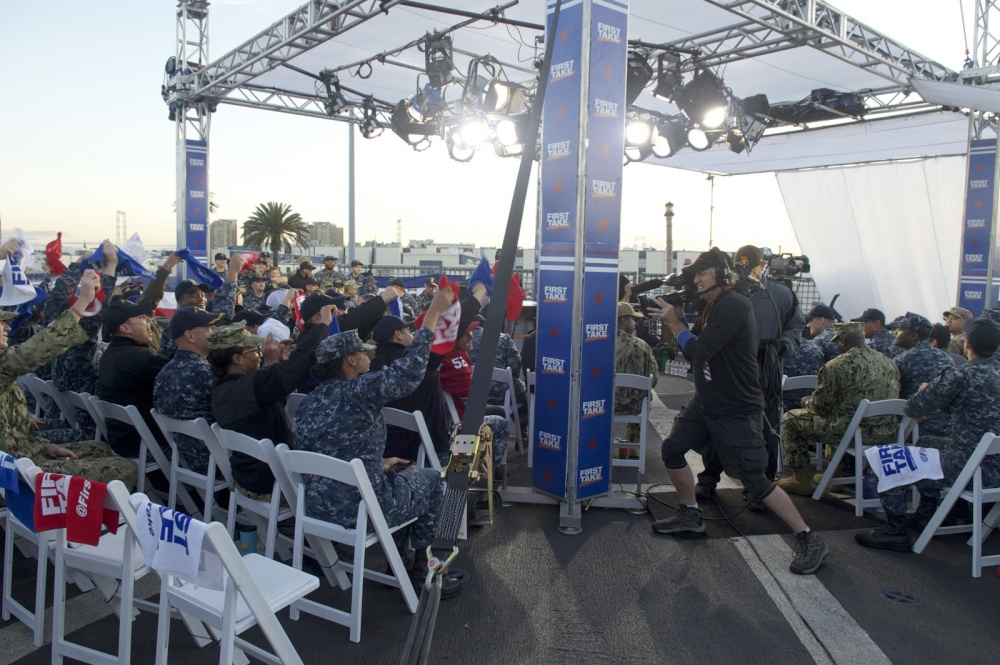 Over 150 Sailors, veterans, families and friends attended the live broadcast of “A Salute to America’s Heroes,” in celebration of the upcoming Veteran’s Day.

“What better a ship to do a Veteran’s Day show on, than on the USS Freedom,” said Cmdr. Michel Falzone, the ship’s commanding officer. “This is great for morale as a lot of our crew can relate through sports. It’s really the common thread that can bring everyone together.”

In addition, four Sailors asked sports-related questions live on air and several other Sailors took part in a pre-taped opening for the show.

“There’s a lot of Sailors on our ship who are huge sports fans,” said Damage Control Fireman Samuel Hardin, one of the Sailors who asked a sports-related question during the live taping. “It’s not every day that you have ESPN on board your ship and the fact that they are here doing this for Veteran’s Day on a ship named Freedom, it has a special significance for us.”

The live taping is part of a week-long celebration by the network in honor of Veteran’s Day, with additional shows planned for the week leading up to Nov. 10.

“First Take” staff worked with the Navy for several months to select the best location to showcase the Navy’s Sailors and ships. The show’s producers said they chose Freedom because they wanted a location that would be “special” and “standout” from the other shows ESPN is airing later in the week.

“This is actually our favorite event of the year,” said Brian Bourque, producer for “First Take.” “It’s great to do this for the service members, and all the excitement around the base is just amazing.”

Freedom is the first ship of the Freedom-class littoral combat ships (LCS) and the third ship of the U.S. Navy to be named for the concept of freedom. LCSs are designed to be fast, agile, shallow draft, and mission-focused with the ability to operate in littorals and open ocean.