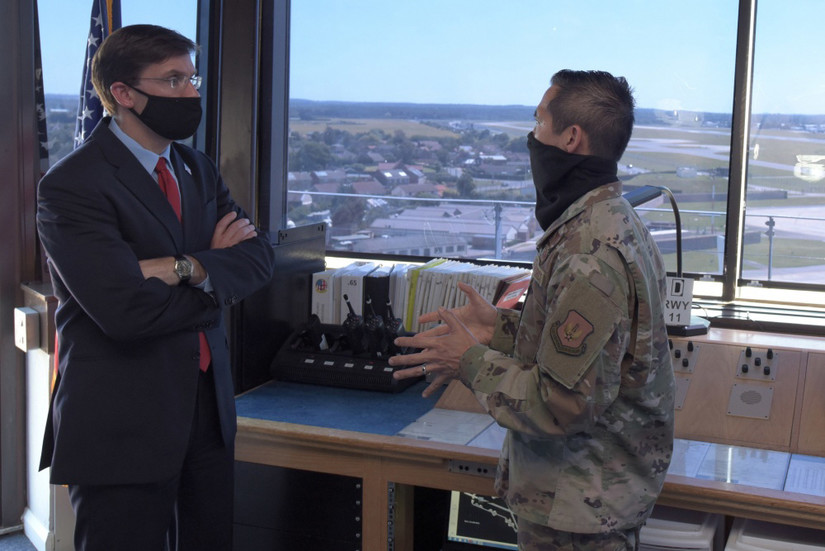 JUNE 29, 2020 – Defense Secretary Dr. Mark T. Esper visited officers and enlisted airmen at Royal Air Force Mildenhall in England on Thursday, getting updates on missions and discussing the base’s role in the European and African theaters.

Esper met with Mildenhall airmen and families and toured the installation. He visited the air traffic control tower, static displays of a CV-22 Osprey and RC-135 Rivet Joint, and spent time talking to officers and enlisted personnel during his tour.

People are our greatest assets, and it’s my job to ensure they’re not only technically sound, but physically, mentally, emotionally and spiritually cared for.”
Defense Secretary Dr. Mark T. Esper

Esper spoke about the base’s multiple mission sets, modernization of the U.S. military, and the future in promoting social equality and justice around the globe.

“My goal is to help every airman, soldier, sailor and Marine to create the strong balance needed between their professional lives and personal lives,” Esper said. “People are our greatest assets, and it’s my job to ensure they’re not only technically sound, but physically, mentally, emotionally and spiritually cared for.”

The former secretary of the Army and 27th secretary of defense spoke about the importance of RAF Mildenhall’s role in the National Defense Strategy and in the national interests in both the European and African areas of responsibility.

“The various mission sets that call RAF Mildenhall home solidifies this base as one of the best assets the Air Force and the entire U.S. military has around the globe,” the secretary stated. “From providing fuel, inserting operators into austere locations, gathering vital intelligence or rapid mobility of personnel and cargo, this installation is fully prepared to get the job done.”

Air Force Col. S. Troy Pananon, commander of the 100th Air Refueling Wing, spoke about the importance of airmen being able to meet and discuss topics with leaders of Esper’s caliber.

“I’m extremely thrilled and proud of how Team Mildenhall went out and executed Secretary Esper’s visit because these opportunities don’t always come, but when it was our time, we were ready,” Pananon said. “Being able to meet, interact and present ideas to someone of Esper’s stature, someone who makes very high-level decisions, is a chance I’m glad our airmen were able to take part in, and the team once again exceeded my expectations.”