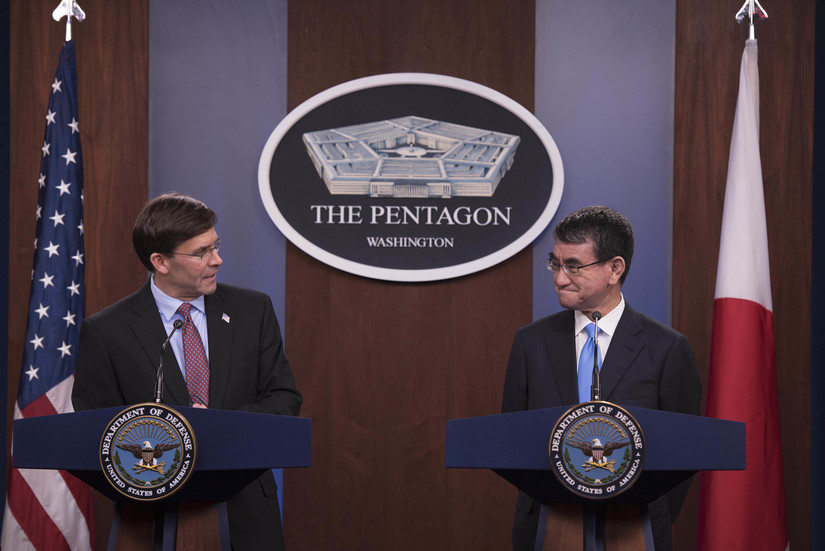 Speaking with reporters after today’s meeting, Esper noted that on Jan. 11, the United States and Japan celebrated the 60th annual signing of the U.S.-Japan Treaty of Mutual Cooperation and Security.

“The agreement formalized our commitment to addressing shared security concerns on the basis of freedom and democracy,” he said. “Since then, we have united to promote a free and open Indo-Pacific region and to uphold a rules-based international order.”

We are grateful to Japan for ensuring our access to training ranges and air spaces, which help us maintain our readiness and enhance regional security and stability to deliver a strong deterrent message to China and North Korea.”
Defense Secretary Dr. Mark T. Esper

Esper thanked Kono for Japan’s decision to deploy its self-defense force assets to the Gulf of Aden, Gulf of Oman and the Arabian Sea. “In advancing our maritime security objectives, we will continue to share information and cooperate on operations in the Middle East as we work to promote freedom of navigation and freedom of commerce,” the secretary said.

Another American priority is the complete denuclearization of North Korea, Esper said.

“The relationship [between] the United States, Japan and the Republic of Korea remains vital to addressing this challenge, and we will continue trilateral defense exercises and information sharing to bolster regional security and achieve that objective,” he said.

The United States also seeks to balance constructive engagement with China as it protects U.S. interests, the secretary added.

“We continue to counter China’s destabilizing behavior in the region, especially in the South and the East China Seas,” Esper said. “And we remain opposed to unilateral attempts to undermine Japan’s administration of the Senkaku Islands.”

They also discussed their progress and the realignment of U.S. forces in Japan, Esper said.

“We are grateful to Japan for ensuring our access to training ranges and air spaces, which help us maintain our readiness and enhance regional security and stability to deliver a strong deterrent message to China and North Korea,” he said.

“We must maintain the momentum of last year’s 2+2 meeting as we shore up potential vulnerabilities and expand our cooperation in areas such as space and cyber,” he said.

The secretary said the U.S.-Japan alliance has experienced a remarkable evolution over the past 60 years, and their strong, bilateral relationship will continue to be critical to collective security and regional stability.

“I look forward to deepening that relationship working with you in the future,” Esper told Kono. “I … thank you for your great cooperation and your friendship.”

Kono said he is grateful to have the opportunity to visit Washington as Japan’s defense minister and hold discussions at the Pentagon with Esper on making the two nations’ alliance even stronger at the beginning of this milestone year.

First discussing the situation in the Middle East, including the recent developments in Iran, Kono said Esper explained how U.S. forces are operating in the area.

“I responded that we will make persistent, diplomatic efforts to ease the tension and stabilize the information in the region,” Kono said.

Second, the defense minister said they affirmed that ballistic missile launches in North Korea, pose a serious threat to regional security and agreed on the full implementation for “resolution of complete, verifiable, irreversible dismantling of ballistic missiles.”

“[The] Japan-U.S. alliance has become even stronger, and we affirm to continue to closely work together to reinforce the alliance’s deterrence and response capability to operationalize our aligned strategies,” Kono said.

“It was highly significant that we discussed the many issues and concerns and agreed upon the way ahead … between our defense agencies,” the defense minister said. “I’ll commit myself to making our alliance even stronger based on today’s outcome.”