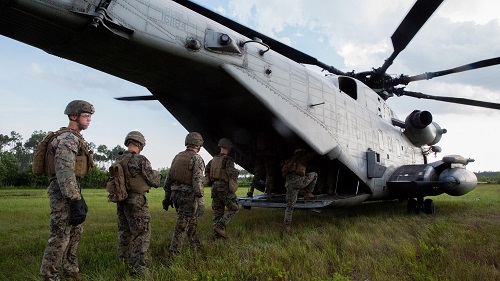 Derived from the longer two-week helicopter rope suspension training course, the fast rope masters course focuses on qualifying noncommissioned officers and above as subject matter experts and qualifies them to train Marines within their subordinate command.

“It’s a force multiplier for conducting operations,” said Sgt. Joshua Jelinek, a HRST instructor with EOTG. “We teach Marines to become fast rope masters and they can go back to their units and safely conduct fast rope operations with their junior Marines.”

Throughout the week, the Marines were taught the key fundamentals of a fast rope master’s roles and responsibilities. Afterward, They trained on multiple platforms to include a tower and rotor-wing aircraft.

“As a regular roper, you’re paying attention to the rope master and trusting in him that he’ll put you on the rope at the right time and give you the correct indicators,” said Staff Sgt. Kyle Tanner, a company operations chief with 3rd Battalion, 6th Marine Regiment.

The course is the first of its kind. The unit plans to run the course four to five times a year, so that Marines routinely learn and develop their efficiency, according to Jelinek.

“The student’s feedback is key,” said Jelinek. “We want to know better ways to suit the needs of the Marines coming through this training.”

After a successful week, the Marine students will be sent back to their commands to pass the knowledge to their respective units.

“I want to take away the ability to take my Marines up in a bird and send them down the rope fast and efficiently,” said Tanner. “Whatever situation comes to hand, whatever area terrain we come across, we’ll be able to get there.”