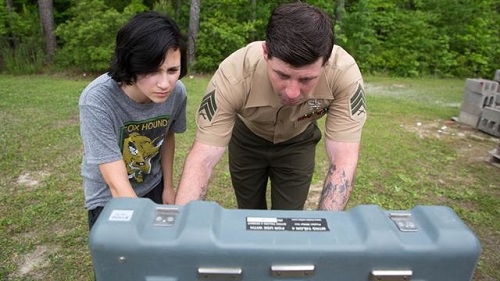 MAY 16, 2016, SWANSBORO, N.C. – Swansboro High School is home to a robotics club composed of students enticed by engineering. The club competes in annual tournaments where each team must build a robot capable of performing a designated task.

The Marines showed the students the capabilities of their robotics platforms in an effort to inspire them to create the best possible robots for their competitions and to expose them to the world of engineering.

“We wanted them to take away what some different capabilities and concepts for robots could be,” said Sgt. Doug Hardy, an EOD technician with the unit. “We wanted to get them to really open their eyes up and get them interested so when they move onto college they have a little bit of a knowledge and an understanding of robotics platforms.”

While robots are used for a multitude of tasks worldwide, EOD uses their robotic platforms, the Talon and the Pacbot, to battle against the tools of modern warfare, and, more specifically, improvised explosive devices. The robots allow the Marines to maintain a safe distance between themselves and any possible danger while disabling the threat.

“For something that can do so much and save so many people, they’re not as complex as you’d think they’d be,” said Andrew Taylor, a Swansboro High student and co-captain of the robotics team, of the EOD robots. “They’re small, but they’re very useful.”

The students were able to operate the robots during the demonstration and attempted to grab hold of several object, such as golf balls, traffics cones and batteries, and place them in specific places. The hands-on application demonstrated the robots’ abilities and inspired the team to stick to their guns.

“We originally wanted our robot to have some of the same things as the EOD robots, but ultimately gave up on some of those ideas,” said Taylor. “We learned that we shouldn’t give up because today we saw that those ideas are actually very practical. This whole demonstration was a good experience for us to get a look into engineering.”