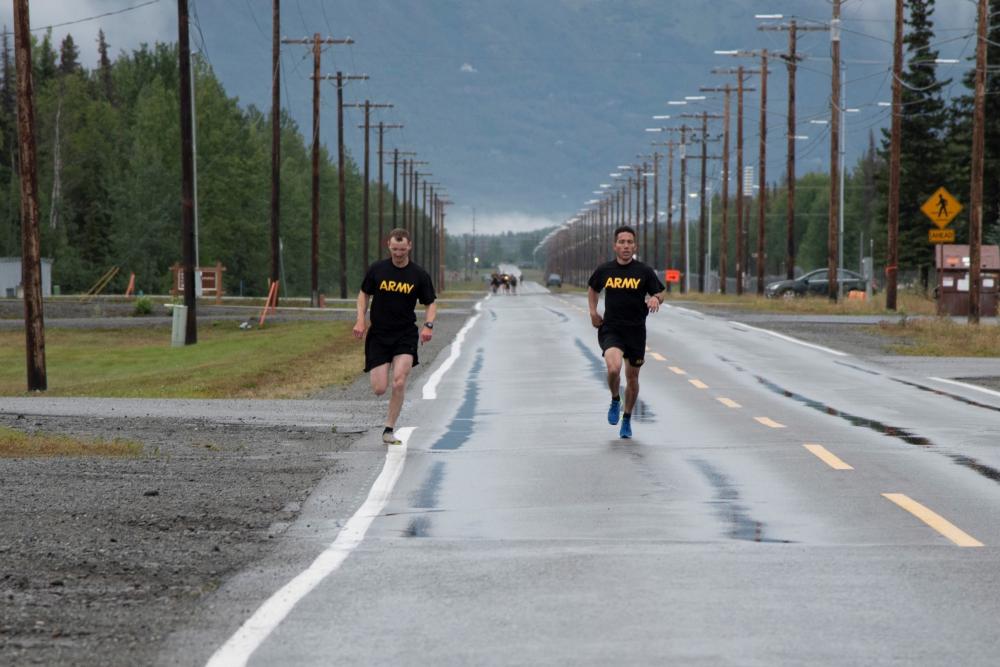 SEPTEMBER 2, 2021 – Soldiers with the U.S. Army Corps of Engineers – Alaska District partnered with the 6th Brigade Engineer Battalion to assess their strength and stamina during the Army Combat Fitness Test on Aug. 17 at Joint Base Elmendorf-Richardson, Alaska.

“It was a team effort to complete this requirement and it is always great to have an opportunity to work alongside our fellow engineer Soldiers,” said Col. Damon Delarosa, Alaska District commander.

Eleven of the of agency’s officers and non-commissioned officers partook in the ACFT 3.0 as part of the test’s data collection period. However, unlike their battalion-level counterparts whose mission is focused on combat operations, the district’s Soldiers provide public engineering services in peace and war to strengthen national security, energize the economy and reduce risks from disasters. The efforts of this primarily civilian organization result in the delivery of vital military construction and civil works projects within the state.

“Working at the district provides our Soldiers a broadening opportunity in their military careers, resulting in a leader who can operate in multiple environments,” said Maj. Virginia Brickner, deputy district commander.

Due to the small number of service members at the district spread between Anchorage and Fairbanks, the Soldiers do not participate in organized physical training activities as a group. Instead, they must exercise and prepare on their own. This was their first time attempting the new test, which focuses on better connecting fitness to combat readiness.

“This one does not count for record,” Brickner said. “However, it gives us all a baseline of where we are and how we can do better for when it does count.”

Based on an improved understanding of exercise science and physical training, the Army transitioned from the 40-year-old Army Physical Fitness Test to the Army Combat Fitness Test in October 2019. The new evaluation system consists of six events that measure a Soldier’s performance in high-intensity, interval-based activities.

Currently, the Army is monitoring test scores, collecting data and building on lessons learned. This information will be used to make modifications before officially implementing the full program which currently is scheduled for 2022.

With the song “Eye of the Tiger” blaring over speakers for extra motivation as the test began, the Soldiers determined their preferred deadlift weight between the maximum of 340 pounds and minimum of 140 pounds.

“I chose to deadlift 160 pounds for this event, even though I can lift more.” said Maj. Kathryn Hermon, project manager. “Since this is my first time taking all six events together, I didn’t want to overexert myself. My goal for today’s test is to ensure I can pass all six events.”

After everyone passed the first event at their selected weight, the engineers moved on to the standing power throw. In this activity, Soldiers must throw a 10-pound medicine ball backward at least 4 1/2 meters to test their explosive movements, balance and flexibility. From there, the service members advanced to the test station for hand-release pushups. In the event, Soldiers must do between 10 and 60 repetitions in a two-minute window.

“I have yet to see someone max this one,” said Staff Sgt. Isaac Branson, who administered the test on behalf of the 6th Brigade Engineer Battalion.

Maj. John Hammett, project engineer at the Alaska District, earned top marks in the event with time to spare earned praise and congratulations from his teammates.

“The commander really set the standard for fitness in the previous events, so I wanted to give this one my all,” Hammett said.

After Capt. Justin Dermond, project engineer, responded to cheers from his teammates to conclude the pushup event with 58 repetitions, the group moved on to the next activity – the sprint-drag-carry.

“I like this event most because although it is hard, it tests me the most and I feel accomplished when I finish,” Brickner said.

The test in a series of five 50-meter shuttles that involve a sprint, drag of a 90-pound sled, laterals, carry of two 40-pound kettlebells and final sprint in a three-minute window.

With ease, Delarosa maxed the event with a clocked time of under one minute and 33 seconds, while all the other district members finished under the three-minute mark.

The Soldiers then proceeded to the leg-tuck station, where they attempted to complete one to 20 repetitions. While hanging from an elevated bar, individuals must touch their knees to both elbows to demonstrate core strength.

“This event makes me the most nervous,” Hermon said. “I have done leg tucks before, but the amount depends on the day. I am worried that the previous events will impact my performance.”

She passed the event with three leg tucks and Delarosa maxed it as well by performing the required 20 repetitions. Brickner chose the plank exercise as an alternative. Participants must hold their body straight and parallel to the floor, while resting on their toes and elbows for at least two minutes.

“I know I can do a two-minute plank, so I opt to do that and focus on perfecting other areas of the test while training,” said Brickner.

As she approached the required standard of two minutes and nine seconds, her fellow Soldiers urged her on with shouts of encouragement.

The test concluded with participants posting a time of under 21 minutes in a two-mile run that measures aerobic endurance. The run was delayed for a few minutes as the Soldier at the one-mile turn around had to safely shoo a moose off the course.

“I like the run because it’s familiar,” Brickner said. “Over my 20-year career, I have always had to complete the two-mile run and know what to expect with it.”

Dermond, with Delarosa on his heels, crossed the finish line first with a time just over the best possible score of 13 1/2 minutes.

“The weather was optimal for the test that day and the faster you run the faster it’s over,” Dermond said.

After every Soldier was done with the evaluation, they headed back to the battalion headquarters, where Delarosa presented commander’s coins to the three non-commissioned officers who administered the test.

“At the end of the day, we are all Soldiers, and we cannot thank our fellow engineers enough for helping us accomplish the mission and conduct the test,” Delarosa said.