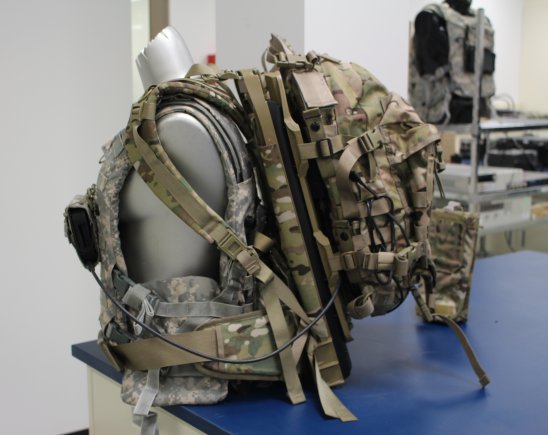 ABERDEEN PROVING GROUND, Md. (March 10, 2016) – Radios, GPS systems and night-vision goggles are just a few of the electronic devices carried by dismounted Soldiers, but all require batteries that can add up to 15 pounds to a Soldier’s load.

To keep these battery-dependent Soldiers powered up for longer intervals, Army scientists and engineers have developed the Energy Harvester Assault Pack engineered to convert the natural movements of Soldiers into usable power.

Energy harvesting keeps Soldiers powered up for extended periods, freeing up critical space in their rucksacks for water, food and ammunition instead of more batteries, Plichta said.

Designed for Army assault packs, the EHAP consists of a rack and pinion generator with a spring-loaded, double-frame suspension system attached to a standard rucksack. With each step a Soldier takes, the rucksack glides up and down while the generator captures small amounts of kinetic energy that would otherwise be lost and converts it into useable electrical energy.

Following successful demonstration of the EHAP technology, CERDEC is now responding to Soldier feedback to develop a lighter, more ergonomically friendly alternative to reduce the EHAP frame’s weight and volume and boost its efficiency without modifying the standard rucksack size.

CERDEC engineers have teamed with biomechanical engineering experts from the Army Research Laboratory, Human Research and Engineering Directorate, to study the impacts of the EHAP on Soldiers’ joints and exertion. ARL HRED is testing the current EHAP iteration on volunteers, and will use the feedback to improve future ergonomic designs to ensure the assault pack feels like it is a part of the Soldier’s body.

“Soldiers must be able to quickly move, shoot and communicate, hauling anywhere from 35 to 135 pounds in their rucksacks, so energy generating packs shouldn’t add to the Soldiers’ fatigue or decrease their maneuverability,” said Julie Douglas, CERDEC engineer “We are committed to reducing the frame’s weight by at least half to achieve this goal.”

CERDEC is also evaluating the EHAP through a mechanical apparatus called the Warrior Torso Test Stand. Developed in-house, the WATTS is powered by two linear actuator motors and features a custom-built mannequin torso wearing various packs to emulate Soldiers’ movements in a variety of environments at different speeds, angles and payloads.

“The WATTS enables us to easily and efficiently test many more pack types and mission scenarios than we could with human volunteers to achieve our goals,” Douglas said.

CERDEC engineers are developing energy harvesting solutions at the component level, which allows for flexible integration into a variety of platforms. Once the assault pack development is completed, engineers will begin integrating the solution into all sizes of Soldier rucksacks for a universal energy harvesting pack frame solution.

Component-level development also opens the possibility for energy harvesting technology to be more easily integrated into commercial items, such as those sold by outdoor activity industries, lowering the price for the Army to procure it back into its systems.

The next phase of the energy harvesting development effort goes beyond charging batteries. The goal is to provide power directly to all Soldier-wearable devices, such as Product Manager Soldier Warrior’s NETT Warrior device, through a Soldier power management system.

First, engineers will use a power manager to integrate EHAP with NETT Warrior’s main power source, the conformal battery, which is a wearable, flat, flexible battery also developed by CERDEC. The power manager, called the Integrated Soldier Power & Data System, is part of a CERDEC and Natick Soldier Research, Development and Engineering Center team effort.

“The energy harvesting system will be able to charge the conformal wearable battery through the ISPDS system, which then distributes power to all the Soldier wearable electronic equipment,” said Chris Hurley, CERDEC engineer.

The ISPDS allows Soldiers to monitor each system’s power usage, and by using a smart phone-like device, the Soldier will be able to toggle on or off specific power-hungry devices to appropriately distribute power to, or away from, those devices as needed.

“This smart capability will allow both the individual Soldier and squad leader to better manage power usage on the battlefield,” Hurley said.

CERDEC’s tactical and deployed power efforts aim to keep Soldiers solely focused on completing the mission — not on the batteries required to power their equipment, Douglas said.

“We anticipate that our science and technology advances will eventually generate as much power as Soldiers need for their missions,” Douglas said. “When this net-zero energy solution also takes the weight off the Soldier, our Army will be even better equipped to deploy an expeditionary, mobile force.”