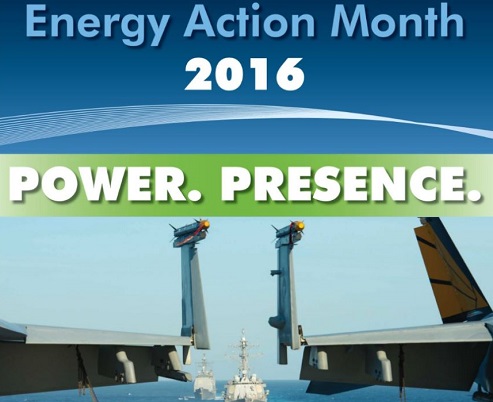 OCTOBER 4, 2016, WASHINGTON (NNS) – Through a presidential proclamation, October has been designated as Energy Action Month to stress the importance of energy for our nation’s economic vitality today and for a sustainable future.

The Department of Navy’s Energy Action Month theme for 2016 is “Power. Presence.” This theme illustrates the strong connection between the Navy and Marine Corps’ wise use of energy and our ability to be when and where we’re needed for national security and humanitarian assistance missions worldwide.

In honor of Energy Action Month, naval commands and organizations are demonstrating their commitment to energy resiliency by reducing energy consumption and promoting awareness of energy as an enabler of combat capability.

Assistant Secretary of the Navy for Energy, Installations and Environment Dennis McGinn and California Energy Commission Chairman Dr. Robert Weisenmiller will headline the California Energy Collaboration Conference at Stanford University’s Hoover Institute Oct. 12. The day’s agenda includes McGinn and Weisenmiller signing a Memorandum of Understanding between the Department of the Navy and California that formalizes their ongoing energy partnership. There will also be a panel with former Secretary of State George Shultz to discuss the importance of energy efficiency and renewable energy development, an announcement for new renewable energy projects at three Navy installations in California and a statewide electric vehicle initiative.

Other activities will be taking place throughout the month, including Navy energy exhibits at the Navy Birthday Reception, the Neptune Festival, Navy Exchanges (NEXs) and the Nauticus Museum in the Hampton Roads area; energy exhibits at San Francisco and Baltimore fleet weeks and during the commissioning of the USS Zumwalt; and coordinated social media campaigns with operational and shore focused energy content by numerous commands.

Senior Navy leaders will be releasing energy-oriented videos during Energy Action Month to raise awareness of smart energy practices and highlight the service’s commitment to optimizing energy efficiency. The videos will be posted online along with other energy videos recorded in the past year. In addition, the Navy’s Task Force Energy will release new content as part of the Energy Warrior App, which is available for free download at app stores.

Energy Action Month is an opportunity to engage with friends and colleagues on approaches for utilizing energy more strategically in our day-to-day jobs and in support of the mission.