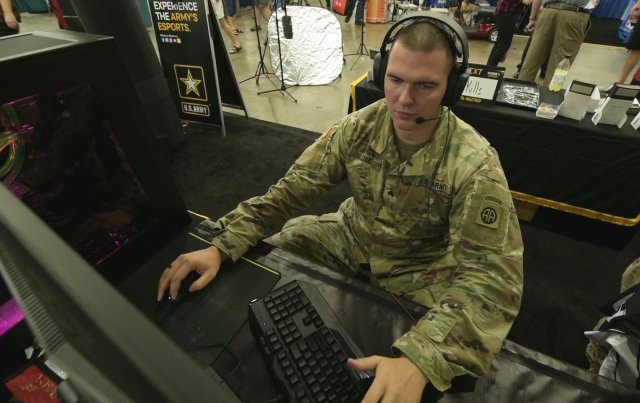 JULY 23, 2019 – A loud cadence of gunfire echoed throughout the compound as the enemy-attacking force — a team of five operators — breached through the second floor.

Unfazed by the commotion overhead, Sgt. David Blose maintained his composure as he crouched in a corner to hold his defensive position. Any “noob,” or rookie, would have charged upstairs to engage the enemy — but not Blose.

Blose’s team was down two teammates as the enemy moved downstairs. It didn’t take long for one to cut across Blose’s line of sight. With a simple flick of his wrist, he clicked the trigger on his submachine gun and eliminated the adversary with deadly accuracy.

Now exposed, Blose moved to cover in the adjoining room as the enemy force ran toward him with guns blazing. Blose fought back and dispatched each enemy in rapid succession.

The virtual compound fell silent as Blose, who goes by “Pumpkin.USAE” in the video game Rainbow Six Siege, waited for the final enemy to make a mistake. With the slightest flutter of movement at the end of Blose’s crosshairs, he opened fire.

As a representative of the Army Esports Team, Blose maintains his competitive edge with every game of Rainbow Six Siege, or “Siege” for short. Further, Blose does this all while maintaining his Army career.

“I never thought I would play video games for the Army,” Blose said. “It is every [gamer’s] dream.”

ARMY ESPORTS
The esports program is an Army Recruiting Command outreach effort designed to connect the Army and American population through a shared passion for gaming, said Sgt. 1st Class Christopher Jones, the non-commissioned officer in charge of the program.

“Gaming as a medium has been growing consistently,” Jones said. “Soldiers have grown up as gamers long before they joined the Army.

“We’re actually putting a light on the gaming community itself, showing that it’s not just a specific kind of person that plays video games,” he added. “Everybody can enjoy this medium together, and it is a great way to grow the community at large.”

One side of the program targets the completive gaming circuit for games like Counter-Strike: Global Offensive, Overwatch, League of Legends, and Siege.

More than 6,500 Soldiers applied to be part of the Army’s esports program shortly after it launched in September 2018. The esports team is slated to announce the final team roster in October.

Soldiers who are identified as the most competitive in select gaming titles will be reassigned to Fort Knox for a three-year tour, Jones said.

While at Knox, competitors will spend most of their time practicing with their teammates to maintain their competitive edge, he added. Teams will then use their skills to represent the Army at regional or national tournaments, or at other gaming exhibitions and conventions.

ARMY LIFE
Blose currently serves as an aviation power plant repairer and squad leader with the 82nd Combat Aviation Brigade at Fort Bragg, North Carolina. He will move to Fort Knox in the coming months.

“As an aviation power plant repairer, I am responsible for the maintenance and repair of turbine engines used by any Army helicopter,” Blose said. “It’s a tedious task, but it is also strenuous and stressful. People’s lives are in our hands, and if we don’t do certain things correctly, it could cause an aircraft to crash.”

Growing up as an Army dependent, Blose said he often played video games with his father and brother.

“My father was big into computers and video editing, so we got to play a lot of different games,” he said. “It made us closer as a family. My mom wasn’t all into it, but she didn’t mind us [bonding] over video games.

“While living in Turkey, I was introduced to the game ‘Counter Strike,'” he added. “My brother and I would wander into the city and go to multiple internet cafes to play the locals. That was my first introduction to competitive first-person shooters.”

Until he relocates to Fort Knox, Blose constantly has to balance his Soldier and esports responsibilities. Every morning, Blose is up for physical training. He then moves into a lengthy duty day troubleshooting, inspecting, or maintaining helicopter engines, he said.

Once home, Blose spends his downtime relaxing or playing games with his wife as he waits for his west coast teammates to log on. Once everyone is online, the team spends the next five hours rehearsing tactics and playing matches. If he is lucky, he goes to bed by midnight.

OUTREACH
Interacting with the public is a core aspect of the esports program, Jones said. Esports representatives have participated in several events, to include their recent involvement at the Skills USA conference in Louisville, Kentucky.

Skills USA is a national-level competition for college and high school students in trade-based career fields. Some of these fields include welding, mechanic work, culinary arts, and cosmetology, Blose said. In addition to the competition, students get a chance to interact with possible employers from their respected trades.

During the event, Blose had many opportunities to engage with the students, often sharing his experience as an aviation power plant repairer.

“There was a number of kids that come up [and asked,] “How do you play games and do [your job] in the Army,” Blose said. “It was fun just reaching out and sharing my stories with them.”

All in all, the competitive esports program is more than frags or wins. Soldiers participating in the program must be in good standing with the Army by maintaining their physical fitness standards, along with their career field-specific certifications, Jones said.

The team’s training schedule will be similar to a traditional sporting environment. At the same time, program officials will help monitor the training requirements for each Soldier to ensure they remain proficient and competitive in respected career fields, Jones added.

The Soldier mindset will be the key moving forward, Jones said. A Soldier’s mental endurance and their ability to handle stressful situations will give them a competitive advantage against other esports organizations.

“A lot of the tactics we use in Siege, we learned through basic training, whether it be different battle drills, tactics, [or] call outs,” Blose said. “If we have a bad match, we’re able to bounce back and adapt to the other team’s tactics.”

DISCORD
In addition to the competitive team, program officials are driven to bring the Army’s gaming community together through Discord, live streams, gaming videos, and social media.

There are about 8,000 gamers already connected through the Army’s Discord server, which includes representatives from the active duty, Guard and Reserve, family members and veterans, Jones said.

“The Discord server is a hub where Soldiers congregate for scrimmages, tournaments, and fun play,” Jones said. “It has channels for every game that’s being played, along with rooms to chat to find new people to play. This Discord is open to the public and is the first and only verified military Discord server.”

The Discord server also includes a section for Soldier support. Under this channel, gamers can speak to a recruiter to get more information about the Army. Further, Soldiers can ask questions about promotions, fitness, or even talk to a career counselor.

“The Army esports program is engaging with the younger generation, and I feel this opportunity is important to help build Army of tomorrow,” Blose said.