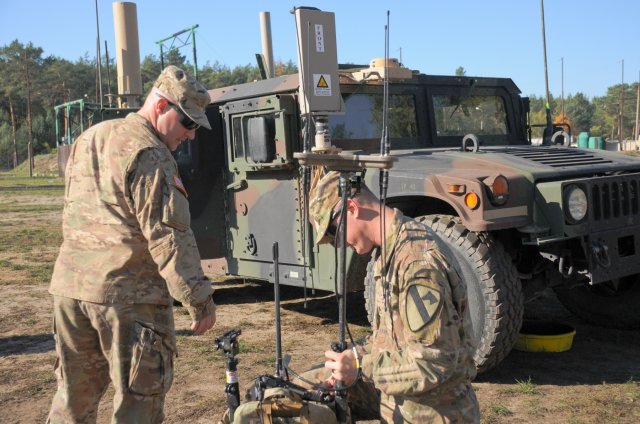 OCTOBER 19, 2018, Zagan, Poland – Soldiers on the ground are now capable of rapidly reacting to electronic and cyber data rather than waiting on their higher echelons.

Electronic warfare, known as the battle in the electromagnetic spectrum, relies on data and signals to survey, fight and defend. Collecting enemy radio signals, sensing radar of an incoming threat, and utilizing radio waves to confuse or disable an enemy’s electronic communication methods are all means in which electronic warfare specialist teams strive to train to perfection.

Team members are learning to better operate and integrate EW capabilities, including the VROD, VMAX and Raven Claw. The VROD and VMAX are part of the backpack system that surveys the field from an electromagnetic perspective and delivers limited electronic assault capabilities such as signal interception and jamming. Raven Claw, a mobile computer system, offers on-the-ground planning and management without any network connection.

“These teams are tied to surveying the battlefield, going out with the scouts and being the lead elements,” said Sgt. 1st Class Jerry Wheeler, the noncommissioned officer in charge of the electronic warfare section, Headquarters and Headquarters Company, 1st Armored Brigade Combat Team, 1st Cavalry Division. “We’re using it for real-time information.”

Utilizing both dismounted and mounted systems allows forward deployed Soldiers to act on electromagnetic information as they receive it.

“Having it [EW technology] at this level helps a local commander make more EW type decisions,” said U.S. Army Staff Sgt. Benjamin Donahue, an electronic warfare noncommissioned officer assigned to 1st Armored Brigade Combat Team, 1st Cavalry Division. “If you have it at only the high echelons, you’re waiting on a report to come down later, versus something you can do right now.”

Though Ironhorse Soldiers did not have the opportunity to train on the equipment before their rotational deployment across Europe, they quickly brought themselves up-to-date.

“We never saw it before we came out here,” said Wheeler. “We had a month of training at Grafenwoehr, Germany. In the future, you would train before coming out. We’ve got a good handle on it.”