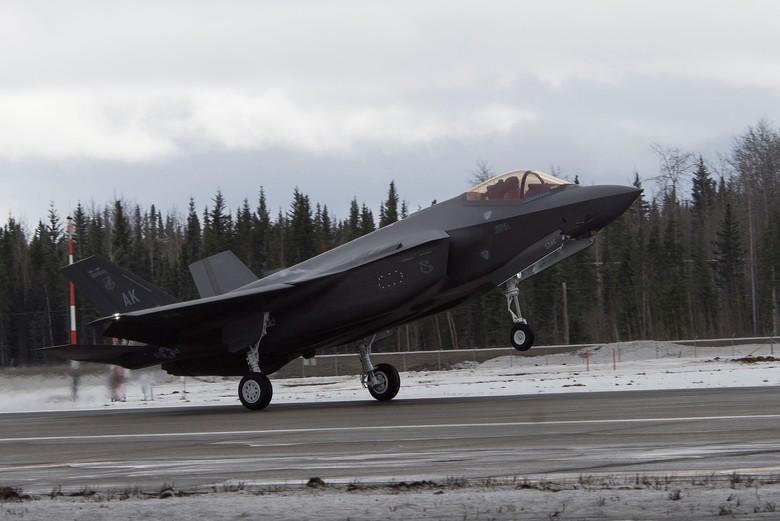 APRIL 22, 2020 – It was a historic day for Eielson Air Force Base as the installation received its first two F-35A Lightning II fighter aircraft April 21.

With the arrival, Eielson AFB is now Pacific Air Forces’ first base to house the fifth-generation fighter aircraft.

“This first aircraft is a milestone,” said Col. Benjamin Bishop, the 354th Fighter Wing commander. “Making the first aircraft arrival possible has been a long path, but it’s also just the first step in a journey that will continue at Eielson Air Force Base for decades to come.”

With a total of 54 F-35As scheduled to arrive by December 2021, Alaska will be the most concentrated state for combat-coded, fifth-generation fighter aircraft. The state will also continue to be a premiere training location as home to the Joint Pacific Alaska Range Complex’s 75,000 square miles of airspace.

“When you station the F-35 at Eielson (AFB) and you have the F-22 Raptor down at Joint Base Elmendorf-Richardson, working together in the JPARC with our 18th Aggressor Squadron and ground training assets, you have the perfect training field for the F-35 to develop,” Bishop said.

Maj. Kathryn Damron, the 354th Aircraft Maintenance Squadron commander, knows what this aircraft arrival signifies not only for her squadron, but for the base as a whole.
“We get to establish what the standard looks like for PACAF’s F-35s,” Damron said. “It’s a huge responsibility, and we don’t take it lightly.”

After months of preparation and support from units around Eielson AFB, the recently reactivated 356th Fighter Squadron is now ready to begin the journey to full operational capability.

“We recognize that when you do something big, like bring in a new mission and stand up a combat capability in a wing, that everybody on the base has a part to play in it,” said Lt. Col. James Christensen, the 356th Fighter Squadron commander.

Everybody is not limited to Eielson AFB personnel, but also includes the surrounding communities and their support as well.

“We as Airmen and families are part of the greater Fairbanks North Star Borough community and part of the Alaska community,” Bishop said. “To see the community come together to support this new mission is truly inspiring.”

“We have a new mission,” Bishop said. “It’s here and we’re going to grow that mission as we continue to invest in our people, families and community. We won’t look back as we pioneer the airpower frontier.”